THOSE THAT LIVE IN A FANTASY WORLD

What did the President of TRNC Akinci say after 46 years, during his speech on June 25, 2020? “The Greek Cypriots are our brothers.” Yes, it seems we have not learned from our history and repeatedly make the same mistakes. After the disaster referendum for the 2004 Annan Plan, this ghost appeared again at a five-party conference in Crans Montana, and still we failed to learn any lessons. The TRNC is coming up on an election under such conditions this October.  A new set of traps are being set against our Cypriot kin, at the same time the rivalry in the Mediterranean front of our Blue Homeland struggle reaches its peak, and while imperialism uses the Greek Cypriots for all manner of plots and hostility on the frontline against Turkey and the TRNC. The name for this trap is the Federal Solution. The backbone of the mindset that makes Akinci say “The Greek Cypriots are our brothers” is specifically targeting this goal. 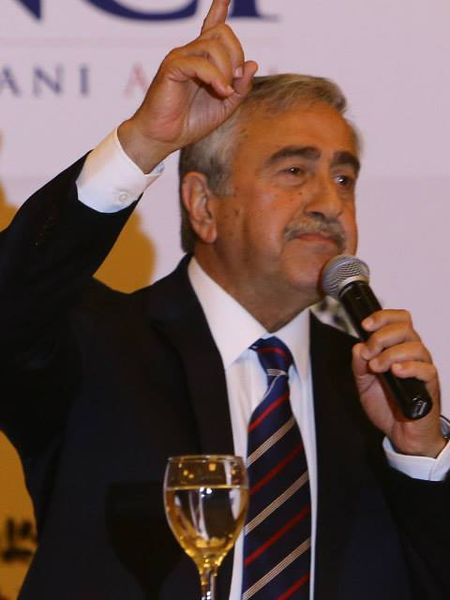 Three years ago, Mustafa Akinci gave a press conference at a hotel after the Crans Montana Conference, which had essentially already failed on July 7, 2017. There, Akinci said: “Guterres (UN Secretary-General) has said that some approaches that will satisfy the both sides on “Security and Guarantees”, which were the most critical article of the talks… He said that new mechanisms on ‘Security and Guarantees’ can be put in place, and the adaptation to this new system can be achieved, in this aspect… In short, he told his ideas about a new system that can be replaced with the existing “Security and Guarantees” system…” Akinci went on his speech, with adding that the Greek side did not give up on their motto of “no troops, no guarantees” on the island from the beginning of the conference:

“In this context, it is useful to underline this one thing: the reports and claims that ‘Turkey has never helped in this regard, has never taken steps on this issue, never opened up’, are totally untrue. In fact, Turkey has been willing to do so all this time. They also have shown the signs that they were ready to take steps on these issues, and that they could do even more than that, to the Secretary-General himself. These were discussed at last night’s meeting. Other than that, it is already known that there would be a significant reduction in the size of the military.”

On July 10, 2017, exactly a week after that press conference, the article of the journalist Aysu Basri Akter of Gazete 360, who is close to Akinci, was on the agenda, with the headline “Here are the Truths of the Crans Montana“. This journalist verified what Akinci said. According to the report, the Turkish side said on the first day of the conference that it could withdraw a significant amount of troops from the island the day after the agreement, and following this, grant a Turkish Cypriot as president every two terms, if all goes well, they can only leave behind a symbolic amount of troops on the island.  The journalist continues:

“We later learned that this ratio was 950 Greek soldiers to 650 Turkish soldiers. With all that, Turkey has said that the conditions of the guarantee agreement can be revised in parallel to the conditions of our time, and if necessary, the name can change to something such as the friendship pact”.

It is important to remember all of this, even three years later; I am talking about very crucial proposals for a process that is almost impossible to turn back from.

At the press conference, Akinci said that he was very upset that Crans Montana has failed, and I am very upset to write these lines now. Bringing up the Turkey’s option to withdraw troops from the island during the summer of 2017 at a juncture where the conflict over the Blue Homeland in the Eastern Mediterranean is expected to grow to an even larger scale, where the Seville Map is being imposed on Turkey, where an anti-Turkish military drill is carried out almost every month, is completely unbelievable. I sincerely wish that statements from both Akinci and the journalist had not reflected the truth on this issue. It is not possible to understand why our bureaucrats from the Foreign Affairs department have brought up the subject of our military presence in TRNC, which is considered as Turkey’s second naval fleet in the Eastern Mediterranean, especially during such a critical period. It is very disturbing and worrying for the future, that some very serious compromises were made concerning the  withdrawal of the Turkish troops during the Crans Montana process, after the decision of supporting the union of the island during the Annan plan referendum process, which was marked on the Turkish foreign history with the motto of ‘Certainly, Yes Mom!’… If this was brought to the agenda by Akinci, we would have seen it as a normal thing. However, if this was actually brought up by Turkey as is claimed, then we should be very, very concerned. It was actually very alarming just before the election that this report was brought up by Veteran Fighter Journalist Sabahattin Ismail, after a 3-year time lag. Given the scale of the compromises that were considered to be applied on the security issues in Crans Montana Conference, which were held almost a year after the FETO coup attempt in Turkey,  it is impossible not to worry about both the TRNC, and Turkey, and the Blue Homeland as a whole. About a year before Crans Montana, and shortly after the FETO coup attempt, Greek Cypriot former MP (DISY), Christos Rotsas said,

THE GEOPOLITICAL LOSSES ARE IRREPARABLE

None of us can carry the burden of the geopolitical losses, to our future generations. Geopolitical blindness can never be accepted as an excuse. The loss of the TRNC and the loss of our military presence in the TRNC, is a direct loss for our Blue Homeland. The Turkish Foreign Minister was blind enough to say that “Turkey does not have a Cyprus problem”, in 1950, can you imagine that? Five years later, atrocities against the Turks began. And 14 years later, the Erenkoy (Kokkina) massacre took place. We did not do anything. The Greeks officially mocked Turkey with the song “Bekledim de Gelmedin” (I waited and you did not come).

Although the military success of the 1974 Peace Operations was partially turned into a political success in 1983, it could still not be put into a decisive and a permanent position, with Turkey’s short-sighted policies and the pressures for a federal solution from the Euro-Atlantic centers. We were dispersed, and this dispersion is still ongoing. Otherwise, how can we explain both the Annan Plan and the compromises that Turkey made at Crans Montana as anything but suicidal? It would be very dangerous to come up with the solutions that will serve Greek Cypriots policy, while there is a mindset that claims the island has united with Greece via the EU and that the goal of Enosis has achieved; there is also a mindset that does not hide that their main goal is to remove Turks from the island completely or to be integrated as a minority on the other side. There are some things that we need to learn from the Greek Cypriots.

On the other hand, there could not be a riskier policy, than coming up with the statement of “all options are on the table”, while they were totally focused on their target. They can bring Hellenism’s fantastic ambitions to our time with the ways that are above politics, and hold on to it tightly, whatever the circumstances may be. We could not do the same. It is incredibly important that the withdrawal of troops from the TRNC has been brought up by Turkey in the summer of 2017 and that this was recalled in the summer of 2020, while we have now taken the risk of a serious armed conflict in both the Eastern Mediterranean and in Libya and that the efforts that are worth millions of dollars in aid and support for our Blue Homeland while the Greek Cypriots are militarizing itself at all levels, in parallel with the EU’s PESCO resolutions. Withdrawing troops from the TRNC is nothing short of geopolitical suicide.

CYPRUS IN THE NEW WORLD ORDER

A new world order is emerging and the Euro-Atlantic system is disintegrating. Turkey is breaking the chains that binds it in foreign policy and security policies. We have already reached the days that the federation solution should not be discussed, and the TRNC should be collectively recognized by a group of friendly countries. The ‘all options on the table’ policy expressed by our policy makers should never be brought up again. Similarly, it is extremely dangerous for the EU to be included in the process as the guarantor state of a political solution similar to the Annan Plan on the island. Things that have happened in Libya and in the struggle for our Blue Homeland will surely keep Turkey busy in the Eastern Mediterranean for many years to come. Giving compromises in the name of the EU in TRNC in current conditions is basically equal to suicide. The only solution for the TRNC is to pursue its independent status as the Turkish Republic of Cyprus.

On the other hand, it is our natural right to know why we still cannot establish a naval base in TRNC, while the establishment of naval bases in Libya and in the Mediterranean, where a vital struggle is being fought, is constantly brought up. Why is at least an agreement about a naval base not considered, something that would have a real impact on the political level, despite not yet being possible on a physical level?

TO FORGET THAT YOU ARE TURKISH

Akinci’s re-election in October would be a disaster for Turkey’s Eastern Mediterranean maritime geopolitics. In the end, the Turkish flag will be brought down from the Besparmak (Kyrenia) Mountains. We will not be at peace in Anatolia when that day comes. A politician with a mentality wherein Greek Cypriots are our brothers and the Greek Administration of southern Cyprus is a partner would never be able to care for the Eastern Mediterranean and Turkish interests. Future generations would have to pay a very heavy cost for the consequences of the fault lines that this Greek Cypriot friendship will create. The mistakes that were made in 2004 and 2017 must never be repeated again. Let us answer to the ideals that are represented by Akinci and his circles with the words of the deceased Elcibey of Azerbaijan : “Even if you forget that you are Turk, your enemy will never forget.”

Other Writings by the Author