The final stages of construction of Austal’s largest catamaran to date were celebrated this week with a traditional ‘coin ceremony’, followed by the vessel’s successful launch. 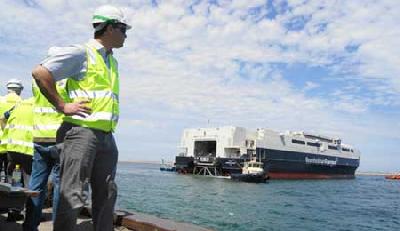 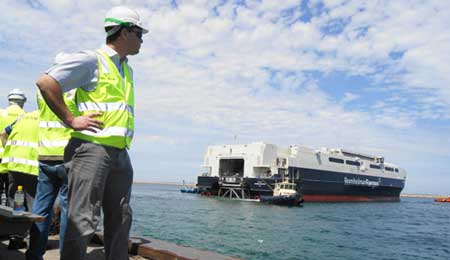 The final stages of construction of Austal’s largest catamaran to date were celebrated this week with a traditional ‘coin ceremony’, followed by the vessel’s successful launch. Placing a coin at the foot of the mast of a newly constructed ship is an ancient maritime tradition which is believed to bring good luck to the vessel and its crew.

Senior Captain Soren Schow travelled from Denmark with a coin from the year 1660. This coin holds significance as it is from the same era as the ship’s namesake, Danish historical icon, Leonora Christina.

An Australian two dollar coin was placed alongside the Danish two penny coin in a small box which was fixed below the foot of the mast.

“Leonora Christina” will join the 86 metre Austal-built catamaran, “Villum Clausen”, which has been operating the route between Rønne on the Danish island of Bornholm and Ystad in south east Sweden for over ten years.

“We look forward to welcoming Bornholmer Færgen’s newest ferry, “Leonora Christina” to Denmark, and are confident that this ship will exceed expectations,” said Senior Captain Schow.

The vessel is owned by Danish company Færgen (formerly Nordic Ferry Services), and will be operated by Bornholmer Færgen, a subsidiary of Færgen. Bornholmer Færgen currently operates a fleet of three ships (one of which is “Villum Clausen”), and has been transporting passengers to the Danish island of Bornholm since 1866.

Austal Chief Operating Officer, Andrew Bellamy, commented that Austal greatly values its customer relationships, and is proud to continue its relationship with the Danish company.

“Austal has worked closely with Færgen and Bornholmer Færgen throughout the design and construction of “Leonora Christina”, and is honoured to be part of this ancient maritime tradition, celebrating the final stages of construction of the vehicle-passenger ferry,” said Mr Bellamy.

The 113 metre ferry was designed and built in Austal’s Western Australian shipyard, and, once completed, will be able to hold up to 1,400 passengers and 357 cars, and travel at speeds of up to 40 knots.

Austal was awarded the contract in April 2009 following a competitive international tender process which saw Austal utilise its in-house design team and experience to develop a highly customised vessel design that met all Færgen’s requirements for the route.

The vessel has been built in accordance with the requirements and under the survey of Det Norske Veritas, conforming to International Maritime Organisation HSC Code and Danish regulations. Registration will be under the Denmark Flag.

With Danish environmental regulations for fast ferries among some of the most stringent in the world, Austal’s design is required to comply with legislation covering environmental noise, wave-wash and exhaust emissions.

The vessel is on track to commence sea trials in March, with delivery scheduled to take place in May 2011.