Unloading the 37 tons of fuel that are on board the Efe Murat to avoid an environmental disaster, probably through the use of a mini-oil pipeline, made by hoses and pumps three hundred meters lon, is under project in Bari. 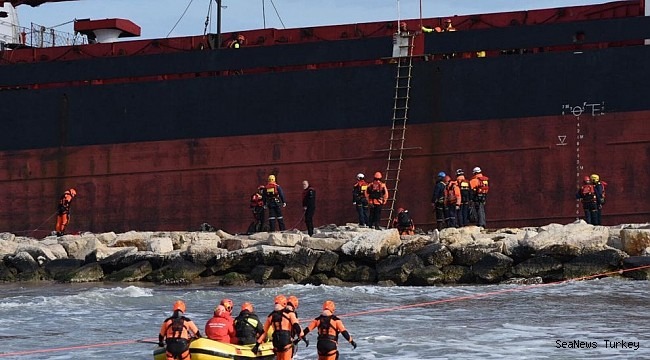 Unloading the 37 tons of fuel that are on board the Efe Murat to avoid an environmental disaster, probably through the use of a mini-oil pipeline, made by hoses and pumps three hundred meters lon, is under project in Bari.
Mayor of Bari, Antonio Decaro, was very clear: the first operation to be done is to defuse the ecological chellenge which the stranded cargo ship Efe Murat poses, which at dawn on 23 February ran aground on the breakwaters of Bari .
The merchant for three days continues to tilt, making more and more the possibility of a spill of diesel at sea and imposing a race against time. In order to avoid pollution, the shipping company has been asked to act as quickly as possible and to present an action plan, which will have the placet of the Maritime Directorate of Bari - led by Admiral Giuseppe Meli - who has been coordinating the operations.
To assess whether the shipowner's plan is appropriate, the coastguard technical officers are carrying out an inspection on board the cargo vessel, which was reached with difficulty, thanks to a firefighter's dinghy, due to the still rather sea conditions available. The expected improvement in the weather is slow to arrive and, in addition to the wind that blows very strongly on Bari, black clouds thicken.
On board the freighter there are also the technicians of the Dutch company, which has been commissioned by the property to carry out the disengagement from the cliff and, even before, the emptying of fuel. In all, it is 37 tons, 25 in the main tank and another 12 in the "reserve" tank. That is where the first to worry the authorities arise. There are two hypotheses to take away the diesel fuel: use of a system of pumps connected to the shore or of plastic tanks to be carried on the ship by a helicopter.
"the inspection is the first step to understand how it will be possible to empty the tank from the fuel - said the mayor, Antonio Decaro - A priority operation to protect the beach from pollution hazards, for which I asked a intervention under the control of the National Civil Protection ". This morning, the public prosecutor Giuseppe Volpe arrived in Bari.
The investigation for negligent shipwreck is entrusted to the public prosecutor Larissa Catella. On Sunday afternoon, the men of the judicial police section of the Port Authority listened to the fifteen crew members of Efe Murat and the Captain (all of Turkish nationality) as persons informed of the facts, with the aim of reconstructing the dynamics of the facts. The merchant ship - according to the first hypothesis - would have lost the command in front of the Bari beach because of the very strong wind and the very rough sea.

US president: As trade deal in offing, he's inclined to extend deadline