Two workers have died among the three who suffered burn injuries in an explosion at a ship-breaking yard. 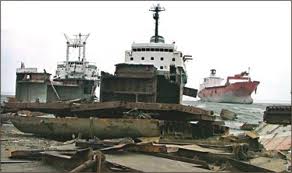 Two workers have died among the three who suffered burn injuries in an explosion at a ship-breaking yard at Sitakunda.

"The tremor from the explosion was felt in the adjacent two or three kilometre radius," he added.  "I've heard that 20-25 workers were working on the ship," he said. Locals and firemen sent the burnt workers to the hospital, he added.

Witnesses said the fire could not be doused out until 12pm and that firemen were still trying to rescue other workers, who were reportedly stranded on the ship.  Local journalist Soumitra Chakraborty told bdnews24.com that agitated family members of the workers and locals had gathered outside the yard.

At one stage, they engaged in chase and counter chase with the police, he added.

Rhine River to Stay Shut for at Least 3 Days