A COMMITTEE of the UN's International Maritime Organisation (IMO) has approved changes to the Safety of Life at Sea (SOLAS) convention that will require verification of container weights before loading. 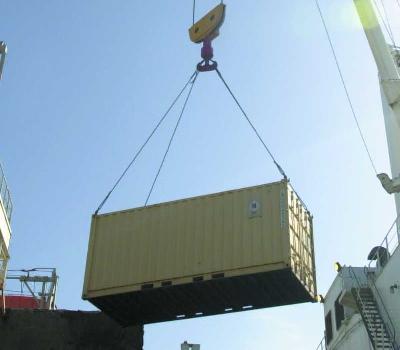 A COMMITTEE of the UN's International Maritime Organisation (IMO) has approved changes to the Safety of Life at Sea (SOLAS) convention that will require verification of container weights before loading.

The regulation by the Maritime Safety Committee to make container weighing obligatory has been welcomed by shipowners and shipmanagers.

But the European Shippers Council (ESC) last September said the "debate seems to be finalised before it began. With the [lack] of shippers' authorised representatives in the IMO, no voices were raised against the measure, even though big industrial interests had opposed the measures."

The Global Shippers Forum (GSF), shortly after an earlier the demand for mandatory verification was announced last September, declared the IMO had made the "right decision".

But the Asian Shippers Council, which also opposes the compulsory weigh-ins, withdrew from the GSF, of which it was a founding member, said it was not representative of shippers' interests.

The draft rules were approved despite opposition, the European and international freight forwarders associations (FIATA and CLECAT) as well as the European representation of maritime terminals and stevedores (FEPORT), said the proposal was based on insufficient evidence and would make little difference to ship operations.

The decision comes in the wake a string of high-profile accidents at sea caused in part by cargo misdeclarations in manifest information, a problem that came to light with the grounding of the MSC Napoli in 2007.

The approved changes to the convention will enter into force in July 2016, following final adoption by the committee in November 2014, reported Lloyd's List.

A statement from the World Shipping Council, a group representing owners and ship managers, said misdeclared container weights "have been a long-standing problem for the transportation industry and for governments as they present safety hazards for ships, their crews, and other cargo on board, workers in the port facilities handling containers, and on roads."

The committee also approved a new Code of Practice for the safe packing, handling and transport of cargo transport units (CTU), including intermodal shipping containers.

The new CTU Code will replace the IMO/ILO/UNECE Guidelines for the packing of CTU. It has already been approved by the United Nations Economic Commission in Europe, and will now proceed to the International Labour Organisation for approval.

Shandong's quarterly trade with Japan declines 1.1pc to US$5.22 billion