U.S. Marines early Thursday boarded and seized control of a German-owned commercial vessel that had been commandeered by pirates, in what appeared to be the first American-led military boarding of its kind amid a recent surge of attacks in the Gulf of Aden and along the east coast of Africa. 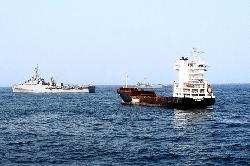 DUBAI—U.S. Marines early Thursday boarded and seized control of a German-owned commercial vessel that had been commandeered by pirates, in what appeared to be the first American-led military boarding of its kind amid a recent surge of attacks in the Gulf of Aden and along the east coast of Africa.

A U.S. Navy photo shows the USS Dubuque, left, and a Turkish frigate, in background, during an operation to retake the Magellan Star from pirates in the Gulf of Aden on Thursday. 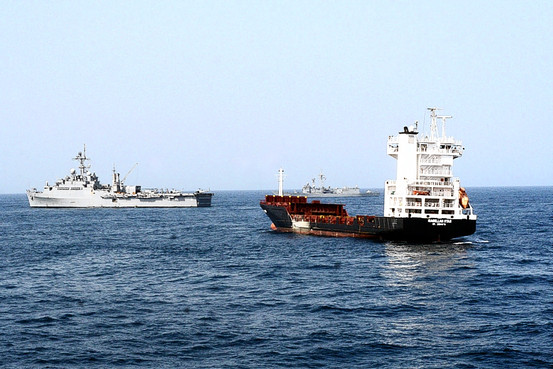 A U.S. Navy photo shows the USS Dubuque, left, and a Turkish frigate, in background, during an operation to retake the Magellan Star from pirates in the Gulf of Aden on Thursday.

A raiding party of 24 Marines boarded the ship about 85 miles southeast of Mukallah, Yemen, in the Gulf of Aden, according to the U.S. Navy. Pirates had captured the vessel, which was carrying steel chains, in the same vicinity the previous day, the Navy said.

The U.S. said there were no casualties among the raiding party or the ship's crew. Nine alleged pirates were captured in the operation.

The Gulf of Aden, a waterway connecting the Red Sea with the Arabian Sea and Indian Ocean, is an important shipping route for goods going to and from Europe and Asia. It is also an important oil supply line, with Saudi Arabia shipping some of its exports through the passage.

Somalia-based pirates started to ratchet up their attacks in the gulf and along the east coast of Africa in 2008. In January 2009, the U.S. set up Combined Task Force 151, designed specifically to fight the new piracy threat. Other bodies, including the European Union, have established their own maritime task forces, which tend to operate in coordination with one another, and with individual navies. Iranian and Chinese ships have also cooperated in more informal ways in the fight against piracy in the region.

America's antipiracy efforts go back more than two centuries, to when President Thomas Jefferson set out to combat Barbary coast pirates in north Africa. But the piracy threat against U.S. shipping largely evaporated by the latter part of the 19th century.

That is, until last year. In the spring of 2009, the U.S. military intervened in a pirate attack on an American-flagged merchant ship attacked offshore east Africa. The crew of that ship retook control of the vessel, but pirates escaped in a lifeboat with the captain of the ship as a hostage. U.S. snipers killed three pirates, captured a fourth and freed the captain in an elaborate naval rescue.

American warships since then have intervened a number of times to ward off attacks while they were under way, often sending helicopters over ships being pursued by pirates, for instance. But this appeared to be the first time since the Somali piracy boom began that a U.S. military team boarded a large vessel under pirate control.

French commandos have in the past stormed French-owned ships taken by pirates, with mixed results. In April, the French Navy recaptured a 48-foot sailing yacht from pirates, who were holding five hostages, including a toddler. One of the hostages—the owner of the yacht and the father of the child—was killed during the French operation.

A U.S. Navy spokesman said Thursday's raid didn't necessarily signal a change in tactics in the U.S. response to pirate attacks. Because commanders had resources available, they decided to act, he said.

"This is a case of us having the right people, with the right capabilities at the right place and at the right time," said Lt. John Fage, a spokesman for the U.S. Fifth Fleet, based in Bahrain.

Naval commanders often have been frustrated by not having ships or aircraft available to respond to attacks, because of the large expanse of ocean they patrol.

The U.S. military said a warship from Turkey, currently in command of a multinational antipiracy task force in the region, responded to a distress call from the German-owned M/V Magellan Star. Two U.S. warships from the task force, the amphibious warship USS Dubuque and the guided-missile cruiser USS Princeton, joined the Turkish ship on the scene.

The Fifth Fleet said 24 Marines from the 15th Marine Expeditionary Unit, attached to the USS Dubuqe boarded the German ship a day after it was seized. A spokesman for the task force said no shots were fired during the boarding, which lasted about an hour. No pirates were injured in the operation, he said. The U.S. Navy said the pirates were "currently under control" of the task force, "pending further disposition." One of the biggest challenges for global antipiracy efforts has been figuring out what to do with alleged pirates once they are caught.

Last month, a federal judge in Norfolk, Va., dismissed charges of piracy against six Somalis accused of attacking a U.S. Navy ship last April near Somalia. One of the men pleaded guilty to lesser charges and will testify against his skiff-mates, who also face lesser charges. The case underscored the legal hurdles in bringing alleged pirates, often apprehended in international waters, to justice.