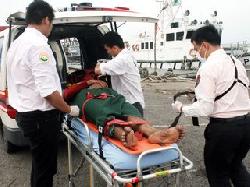 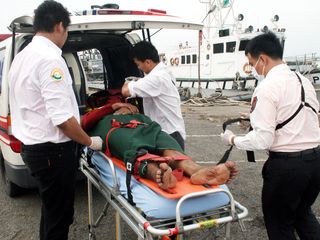 Xin Yi, a cement carrier scheduled to sail from China to Brunei, broke down off Hsinchu at around 10:30 p.m. Monday.

As of Tuesday morning, 18 of the vessel's 22 crewmen had been rescued by Legend of the Seas -- a cruise ship near the scene -- the Coast Guard, Air Force and National Airborne Service Corps. A body was retrieved by one of the ships, the Coast Guard said, and three people were still missing.

The crew included 17 Burmese, four Indonesians and one Taiwanese. The Taichung Harbor Bureau said the victim was Burmese.

In the early hours of Tuesday morning, less than three hours after the first accident, another Panama-flagged freighter, Dili Star, sunk off Kaohsiung County, according to the Air Force's Chiayi Base and the Southern Coastal Patrol Office.

The 12 crewmen abandoned the sinking ship by lifeboat and were rescued by helicopter. None was seriously injured, said the Air Force.

Typhoon Megi, which made landfall in the Philippines Monday, brought heavy rain and strong winds to Taiwan as its outer band crossed part of the island, the Central Weather Bureau reported

Somali pirates behind 35 hijackings in 2010