ANKARA: Turkey's government has seized the one-time state yacht of Kemal Ataturk, the founder of modern Turkey, following media reports that a vice ring had used the vessel to throw sex parties with prostitutes.

ANKARA: Turkey's government has seized the one-time state yacht of Kemal Ataturk, the founder of modern Turkey, following media reports that a vice ring had used the vessel to throw sex parties with prostitutes.

Eight women and two underage girls, all of whom were believed to be prostitutes, were taken for health checks after authorities in the Mediterranean city of Antalya confiscated the 136-meter Savarona, state-run Anatolian news agency reported. 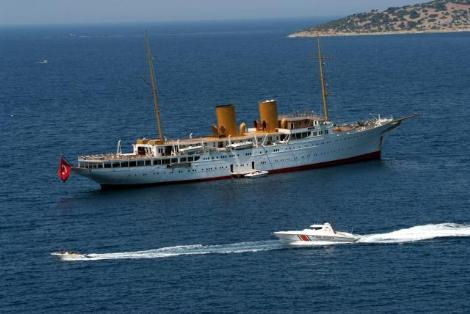 Eight people, including two women, remain in custody, it said.

The Savarona had been leased to a businessman by the Finance Ministry.

"I gave the necessary instructions for the cancellation of the ship's lease," Finance Minister Mehmet Simsek told Anatolian, adding the Culture Ministry should now take ownership of the vessel.

"If the company does not agree on the cancellation of the ship's license, we will take the case to court and make the effort to have it annulled by a court ruling."

Anatolian said leaders of the sex-ring charged clients between $3,000 and $10,000 for a night with the prostitutes, who came from Russia and Ukraine.

Ataturk, a war hero who founded Turkey from the ashes of the defeated Ottoman Empire, is Turkey's most respected figure. Statues and portraits of the warrior statesman are ubiquitous, and insults to his memory are punishable with a jail sentence.

Turkey bought the Savarona in 1938, and Ataturk spent a few weeks aboard the yacht but died later that year.

Mehmet Sevigen, a member of Parliament from the opposition CHP party founded by Ataturk, said the Culture Ministry should turn the yacht into a museum as soon as possible.

"The prostitution scandal on the ship is a major impertinence to the memory of Ataturk," Sevigen said.