Turkey may seek all Turkmen gas from Petronas block

Turkey may seek to buy all 5.5 billion cubic metres of natural gas output at a Turkmen site operated by Malaysian oil and gas firm Petronas, Energy Minister Taner Yildiz said on Wednesday.This gas could be converted to compressed or liquefied natural gas or shipped via a pipeline, and could be destined for Turkey's domestic market of re-exported, Yildiz told reporters after holding talks with his Turkmen and Azeri counterparts. 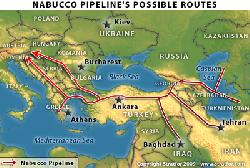 This gas could be converted to compressed or liquefied natural gas or shipped via a pipeline, and could be destined for Turkey's domestic market of re-exported, Yildiz told reporters after holding talks with his Turkmen and Azeri counterparts.

"There is 5 to 5.5 bcm where Petronas is now working. We expressed to the Turkmen minister that we may like this gas," Yildiz said. "We do not see an obstacle to sending this gas to Turkey or via Turkey to other countries.

"We could make an offer for all of it."

Turkey and its partners in the $10 billion Nabucco gas pipeline project are seeking suppliers for the link, which could reduce Europe's reliance on Russia for a quarter of its gas.

The project, which aims to ship 31 bcm after opening in 2014, has yet to guarantee any supplies, but partners have cited Turkmenistan, along with Azerbaijan, Iraq, Iran and Egypt as potential contributors.

Malaysia's state-owned Petronas [PETRA.UL] is developing a Turkmen offshore block that analysts have said could connect with Azeri offshore rigs.

Territorial disputes among the Caspian Sea's littoral states have hampered efforts to develop the basin, which has large gas and oil deposits.

Russia, Iran, Turkmenistan, Azerbaijan and Kazakhstan have argued about the delimitation of the sea since the breakup of the Soviet Union.

"There are places where the borders are not disputed," said Yildiz. "We could seek natural gas, that is from areas that have no problems with the border or the status, that is being extracted offshore from Turkmenistan."

The project faces competition from Russia's planned South Stream pipeline and from two cheaper European projects to import gas via Turkey: the Trans-Adriatic Pipeline and ITGI.

Turkey, which has little gas or oil reserves of its own, wants to become a hub between Western markets and hydrocarbon-rich countries to the East.