Trans-Pacific container rates down for first time in year 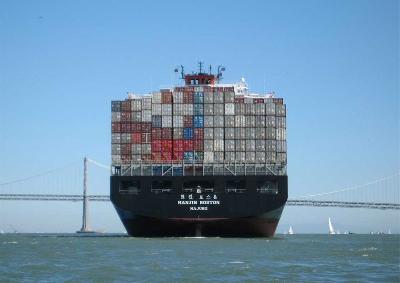 The drop in the spot index comes as trans-Pacific shippers and carriers are starting annual negotiations for service contracts that expire in May. Carriers have said they expect vessel space to be tight despite added capacity that cargo interests hope will restrain rates.

The Transpacific Stabilization Agreement, representing most eastbound carriers, said this month its members expect volume to rise 7 to 8 percent this year, close to a projected 8.8 percent increase in capacity. This week, Alphaliner forecast 14 percent growth in trans-Pacific capacity during 2011.

The latest Drewry spot index was down 5.7 percent from its previous reading of $2,081 on Jan. 31. The index wasn't published Feb. 7 because of the Lunar New Year in China.

Whether the latest index signals a turning point is unclear. Last year the index's spot rates softened in March, though they remained above 2009's depressed levels, before rising rapidly as volume rose during the annual peak season for imports.