Home TANKERS The Trade's Oil Over the Place, Captain!

The Trade's Oil Over the Place, Captain!

In its short life the tanker business has boxed the compass in terms of commercial strategy. In the 1950s and 1960s it was industrial shipping for Big Oil. 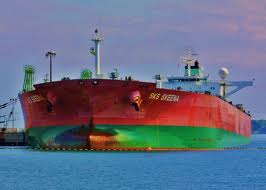 The Trade's Oil Over the Place, Captain!

In its short life the tanker business has boxed the compass in terms of commercial strategy. In the 1950s and 1960s it was industrial shipping for Big Oil. That meant long time charters, a passport to spectacularly high levels of leverage. It was a golden age which made a whole generation of tanker investors rich.

Then in the 1980s, Big Oil figured out that the spot market was cheaper and anyway more oil was transported by traders happy to fix ships spot when they needed to. That was the end of "industrial shipping" and most of the responsibility for tanker investment risk passed to independent tanker owners.

Not an Easy Task

Since then owners have found life less easy. The 1980s were miserable with nearly new super-tankers worth little more than scrap. Then, in 1989, Exxon Valdez triggered a tsunami of safety legislation, including the phasing out of single hull tankers and anti-pollution legislation, with dire consequences for anyone who spilled even a couple of gallons of oil. But owners took all this in their stride, elegantly switching to double hull and dramatically reducing oil pollution incidents.

During the 2000s boom tanker investors were pretty restrained compared with the 1970s or their contemporaries in dry bulk. There was some speculative ordering, but over the last few years the tanker fleet grew at only 5.6% pa. That was quite modest given all the market euphoria. So after all this, surely tanker investors deserve a break? Unfortunately, it seems life just isn't like that.

Suddenly they have a demand problem. Five years ago it looked as though crude oil import growth would be driven by expanding Asian imports and by the USA, which was running out of oil. But it has not worked out that way. High oil prices and the Credit Crisis undermined OECD demand which is now 2m b/d lower than it was 10 years ago (see chart). Meanwhile, high oil prices have stimulated local supplies, (the ubiquitous fracking in the USA) and deep water offshore exploration (the Americas and North Sea).

And there’s another sting in the tail. In 2013 non-OECD oil demand will catch OECD demand (see chart). Market control matters and there are new players on the block. Brazil is in the news with its plans to build large tanker and offshore fleets, with 11 shipyards under construction. Meanwhile, China’s move to order a string of VLCCs sends a similar signal.

So there you have it. Tanker owners have come through past crises with flying colours, only to be confronted by another scenario of change. Will today's Big Oil rely on independents? Or will national interests prevail? A tough challenge, but tanker investors are used to that. 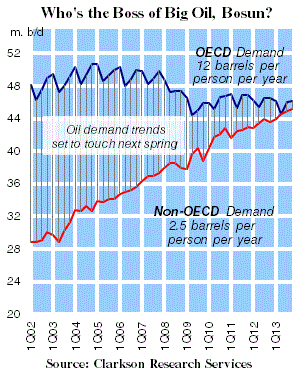