On 21st Feb 2014 Uzmar Shipyard, also known as “Workboat and Tug Factory” of Turkey, held a launching ceremony for the ‘KOC MUSANED-2’, the second of total 6 line handling tugs being built for Kuwait Oil Company’s tug fleet. These 20 m compact boats are reputed to be the smartest tug of its class by the designer Robert Allan Ltd. 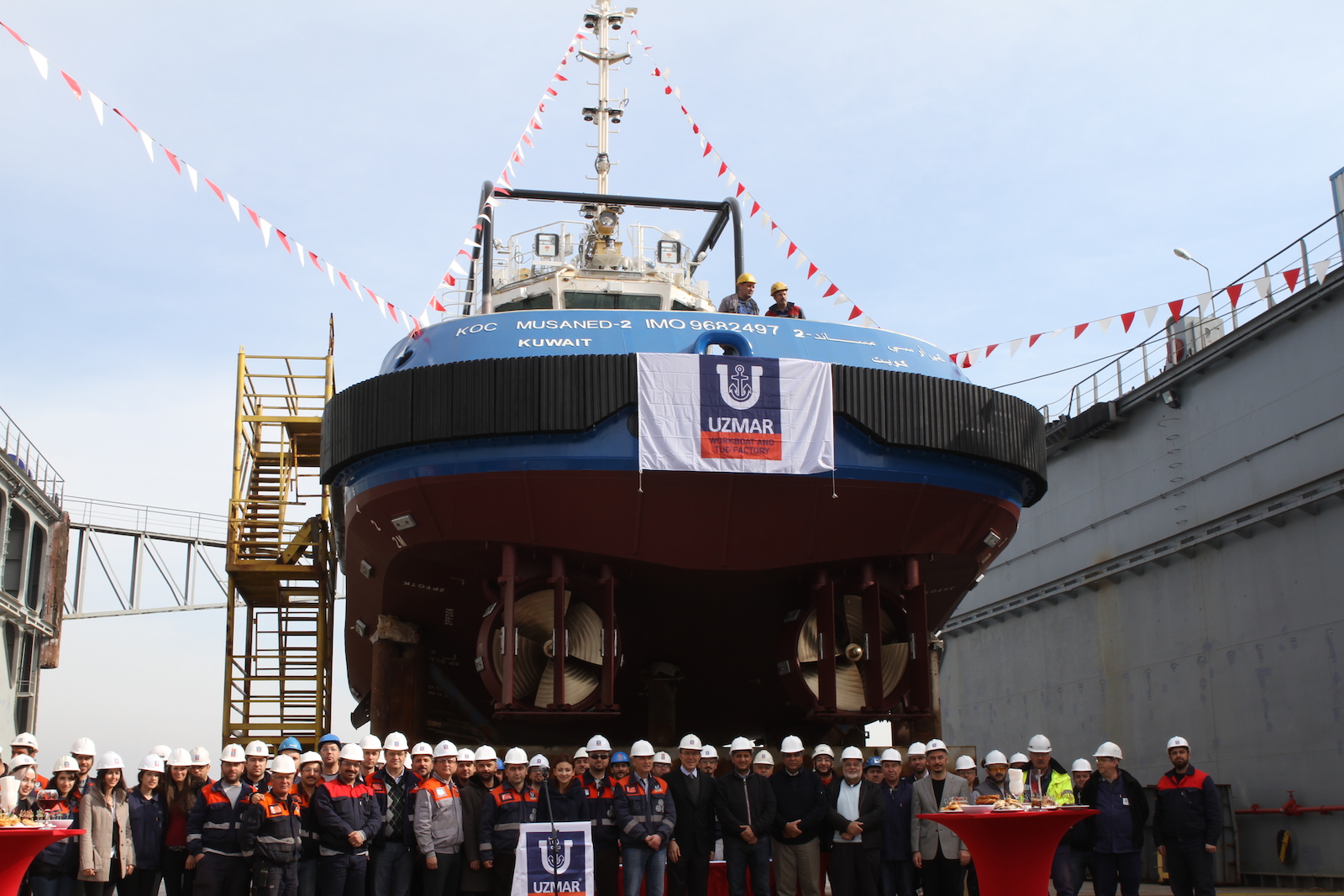 On 21st Feb 2014 Uzmar Shipyard, also known as “Workboat and Tug Factory” of Turkey, held a launching ceremony for the ‘KOC MUSANED-2’, the second of total 6 line handling tugs being built for Kuwait Oil Company’s tug fleet. These 20 m compact boats are reputed to be the smartest tug of its class by the designer Robert Allan Ltd.

The ceremony was held in the presence of Mr Sami Al-Sawagh as the KOC Team Leader, Mr Tariq Usmani as the KOC Marine Maintenance and Technical Service Team Leader Advisor and KOC Project Representatives Mr Shamroz Khan and Mr Anatoly Shepil both are DNV officials for KOC.

Capt. Kaan ALTUG, Board Member of UZMAR during his speech stated: ‘’We are proud to build such smart Line Handling Tugs to assist tankers in near shore loading terminals and at the new KOC singlepoint mooring system further offshore”. He added that “We call them Smart Tugs because these 20 m compact boats are equipped with various machinery and systems that have never designed or build before. Thanks to the designer Robert Allan Ltd. who was able to integrate a very complex list of equipment to such size of a compact boat but those were necessary for the required duties.”

Mr Sami Al-Sawagh, KOC Marine Maintenance and Technical Service Team Leader during his speech stated: ‘’ .. It gives me great pleasure to share my joy, that the process of construction of six Mooring Boats are proceeding smoothly.

We appreciate the hard work, commitment, and professional approach of Uzmar for the continuous successful progress of KOC projects at Uzmar and look forward to see ‘Musaned –II’ honoured as one of the most outstanding vessel built at Uzmar.

After the successful completion of this project, which shall satisfy the high expectations of KOC, we shall feel fully content with the excellent quality of work done by KOC and Uzmar, and hope that same spirit and hard work will continue during the construction of remaining vessels of the series’’.

Again, UZMAR has succeeded the installation of such sophisticated equipment into a limited space available onboard. There is no doubt on the ingenuity of UZMAR obviously the shipyard is always ready for stringest projects.

Robert Allan designed, Lloyd’s register certificated, DNV site surveyed tug has conventional twin screw propellers in nozzles, 20.4m in length, with a breadth of 8.5m and a draft of 2.5m. The boat is classed by Lloyds Register with 100A1 Tug, WDL, LMC, UMS notation.

All the required machinery and equipment installation in a 20 m boat was a challenge for the UZMAR’s in-house engineering. Nevertheless, the fully equipped vessel is modelled at a 3D platform to optimise the tight spaces available for future maintenance and servicing.

The tug is powered by twin CAT C32 marine engines each producing 1200 bHP at 2000 rpm coupled through ZF reversing gear box to Teignbridge propellers in nozzles and the triple hi-efficiency rudder system ensures superior manoeuvrability. This arrangement gives the tug a maximum bollard power of 19 tons ahead and speed of 10.5kts. Caterpillar 4.4 auxiliary generator, rated 86 ekW-50hz at 1500rpm is installed to meet not only domestic shipboard loads but also to power the electrically driven deck machinery.

In line with the KOC’s mission and strategy to maintain highest fleet standards, the Fleet New Building Projects Group (FNBPG) is managing and supervising the fleet renewal tasks from planning to vessel deliveries.

Throughout the new building process, from plan approval stage, on site supervision of the construction until delivery, the FNBPG did utmost contribution to ensure highest safety and quality standards are fulfilled as per KOC governing rules and regulations as well as best international shipbuilding standards. 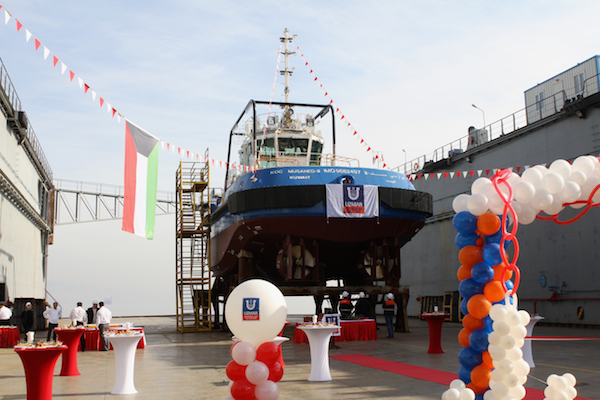 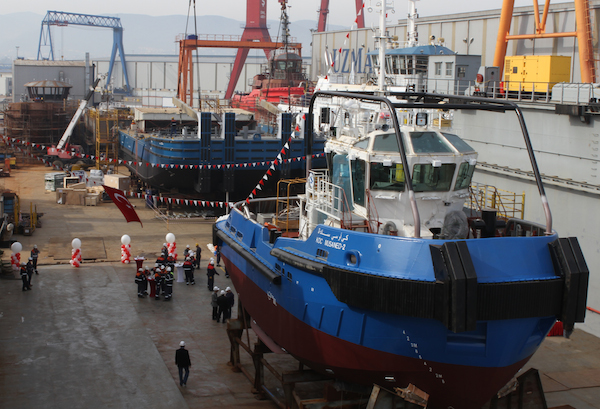