BEIJING's Global Times said the December 5 near-collision between the 9,600-ton missile cruiser USS Cowpens and a Chinese navy ship in the South China Sea was the result of the Americans refusing to stop in international waters before they got too close to China's first aircraft carrier, the 53,000-ton Liaoning. 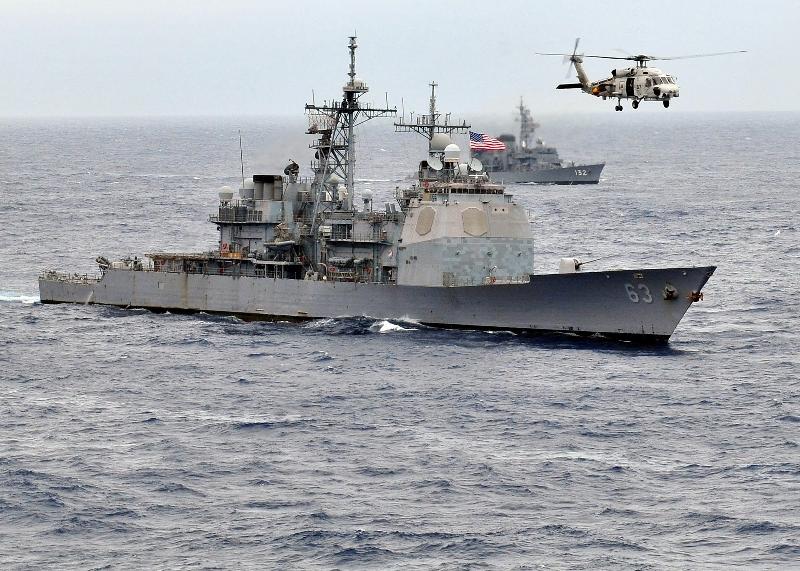 BEIJING's Global Times said the December 5 near-collision between the 9,600-ton missile cruiser USS Cowpens and a Chinese navy ship in the South China Sea was the result of the Americans refusing to stop in international waters before they got too close to China's first aircraft carrier, the 53,000-ton Liaoning.

"The US clearly blocked China's doorstep, and the US warship's arrival near the Liaoning for reconnaissance was no longer so-called innocent passage, and it constituted a threat to China's national security. If the US Navy and Air Force are always hovering around China's doorway, confrontation is destined to happen," said the Global Times.

The USS Cowpens was sailing in the South China Sea near the Liaoning when ordered to stop by the Chinese warship, said the Defence Ministry. At this point the Chinese tank landing ship sailed in the path of the Cowpens, forcing it to make an abrupt turn within 450 metres of the Chinese warship.

The Global Times dismissed the Cowpens' right to sail in international waters. "For a long period of time, the term 'freedom of navigation' has become an excuse for the US military to harass the legal movements of our naval vessels near the China coast," it said.

China's Maritime Safety Administration issued a notice earlier this month stating that no vessels would be allowed to enter areas of the South China Sea due to military training, presumably within the area where the Chinese squadron was conducting manoeuvres.

The state media Global Times denounced its action said the incident "has long since ceased to be the first of Sino-US warship confrontations in the South China Sea, and air confrontations also frequently occur."

The incident involved the USS Cowpens and a People's Liberation Army tank landing ship accompanying the aircraft carrier as well as four other warships.

A State Department official said last week that formal protests were lodged with China over the dangerous encounter through both diplomatic and military channels in Beijing and Washington.

Agence France-Presse reported that Foreign Ministry spokeswoman Hua Chunying declined to speak about the incident at a press conference, instead referring reporters to the Defence Ministry.

"I can tell you in principle that China respects the freedom of navigation and overflight that is in accordance with international laws," Ms Hua said.

The incident took place amid heightened tensions in the nearby East China Sea after China on November 23 unilaterally declared an air defense zone over a large area of international waters that includes islands claimed by Japan.

State-run China Daily quoted Fan Jise, a researcher at the government-run Institute of American Studies at the Chinese Academy of Social Sciences, as saying "it is a relief that both sides exercised restraint this time, as there are channels for maritime consultation between the two sides."