Suspecting that they may have found a Pirate Action Group (PAG), Fort Victoria, under the command of Captain Rob Dorey, was granted approval to conduct a boarding by the Combined Task Force (CTF) 151 Commander, Rear Admiral Sinan Ertugral, Turkish Navy. 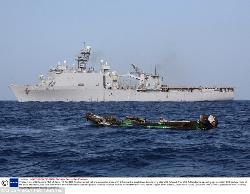 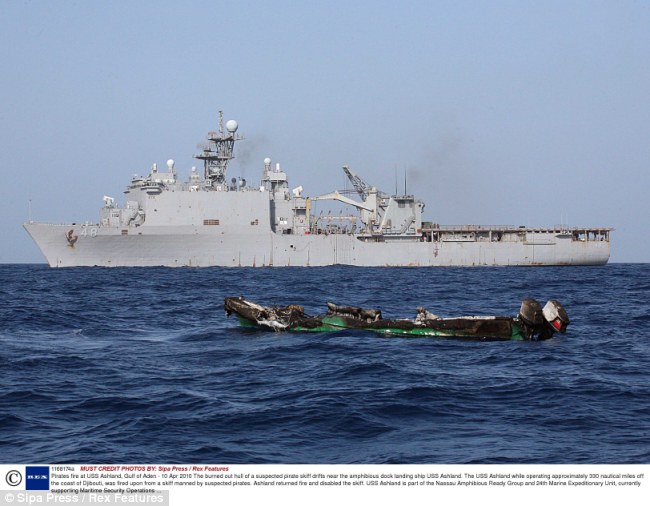 While conducting routine patrols off the Somali coast an embarked 820 Squadron Merlin helicopter identified a suspicious whaler towing a skiff. The whaler contained a significant amount of fuel barrels and when approached by the helicopter, four of the nine passengers tried to hide themselves from view.

Suspecting that they may have found a Pirate Action Group (PAG), Fort Victoria, under the command of Captain Rob Dorey, was granted approval to conduct a boarding by the Combined Task Force (CTF) 151 Commander, Rear Admiral Sinan Ertugral, Turkish Navy.

Royal Marines from the Fleet Protection Group, provide the boarding teams to Fort Victoria's current counter-piracy mission and supported by the helicopter, approached the suspected vessels. As the Royal Marines approached, the suspected pirates made a break for the Somali shoreline, but were rapidly surrounded.

"Contrary to the Hollywood legend, there is nothing romantic about pirates and piracy. It is a blight which has struck the shores of Somalia and strikes at the very heart of the UK's national interests," Colonel Mark Gray Royal Marines, Commander of the task force onboard RFA Fort Victoria and HMS Northumberland, said.

"Countering piracy is one of the Royal Navy's key roles even in this day and age. One cannot help but get a sense of satisfaction at the sight of a bunch of chastened suspected pirates being landed ashore, tails between their legs and the tools of their trade disappearing with a boom and a flash of flame," Gray added.

The Command team onboard Fort Victoria assessed that this PAG was almost certainly in the final stages of preparing to venture to sea in search of new targets, before their activities were disrupted.

CTF-151 is one of three task forces operated by CMF, a 25-nation coalition based in Bahrain. Its main focus areas are defeating terrorism, preventing piracy, reducing illegal activities and promoting a safe maritime environment.

In conjunction with NATO and EU Naval Force, ships from CTF-151 patrol in the Somali Basin and the Internationally Recommended Transit Corridor in the Gulf of Aden. CTF-151 also helps promote to the shipping community best management practice methodology for the avoidance of piracy.