The oil-refining wave in the Middle East is filling tankers to export the region’s processed fuels and driving freight rates to the highest for the time of year since 2008. 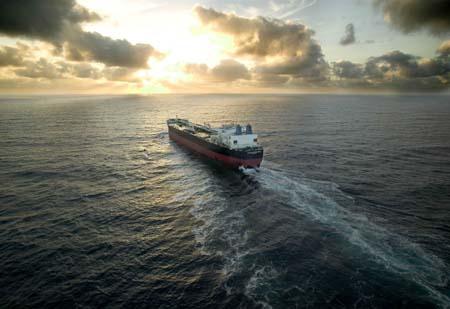 The oil-refining wave in the Middle East is filling tankers to export the region’s processed fuels and driving freight rates to the highest for the time of year since 2008.
Countries from Saudi Arabia to the United Arab Emirates will process 8.8 million barrels a day of crude this year, almost 10 percent of global consumption, the highest in International Energy Agency estimates starting in 2006. Traders booked 19 percent more Persian Gulf oil products on tankers in the spot market this year than the same period in 2013, charter data compiled by Bloomberg show. The largest vessels get rates of more than $22,000 a day, the most for September in six years.
Crude exporters in the region are turning more of their oil into higher-value diesel and jet fuel while cutting dependence on imports of these products. Violence concentrated in Iraq and neighboring Syria isn’t restraining cargoes from elsewhere in the Middle East.

“Clearly this will have a huge impact on demand for product tankers, and in particular larger product tankers,” Eirik Haavaldsen, an Oslo-based analyst at Pareto Securities AS, said by phone Sept. 24. “We’ve started to see some impact already and rates are likely to strengthen.”

Total cargoes of refined products, including some that are arranged on long-term charters, will expand 11 percent this year, according to data from Clarkson Plc, the world’s largest shipbroker. The exports reflect a shift in shipments from a region that accounted for about 33 percent of global crude output last year, according to data from BP Plc. Representatives from Middle East nations will discuss those trends at the Asia Pacific Petroleum Conference in Singapore starting Sept. 30.

Large Range 2 tankers, the biggest oil-product carriers and as such the kind best suited to long-distance trades, earned $22,548 a day on Sept. 19 from transporting Saudi Arabian fuels to Japan, the most for the time of year since 2008, according to data from Clarkson.

They will earn $21,000 a day in the fourth quarter, according to the average of five analyst estimates compiled by Bloomberg. The vessels, also called Long Range, or LR, tankers, last earned that on a quarterly basis on the Saudi Arabia-Japan route at the end of 2012.

“The product tanker market, including Torm, is benefiting from changes to the refining industry where new refining capacity in the Middle East is built close to the crude oil production but further away from the consumers,” Tina Revsbech, Copenhagen-based Torm’s head of tankers, said by e-mail on Sept. 24. “It generates increased ton/mile for product tankers.” LR2s account for 32 percent of its fleet’s total capacity.

While LR rates are strengthening, charter fees for other product tankers have declined because fleet growth over the past decade has been faster than the expansion in trade. The total supply of ships to transport gasoline, diesel and jet fuel almost doubled in the past decade, while the amount of cargo rose 64 percent, according to Clarkson data.

The Baltic Clean Tanker Index, a measure of the cost of shipping refined fuels, averaged 566 points since the start of the year, compared with 627 over the same period in 2013, according to data from the Baltic Exchange, the London-based publisher of shipping costs on more than 50 trade routes. It was at 554 yesterday.

A glutted order book for smaller medium-range tankers could cause traders to use those ships instead, cutting rates for LR vessels, Pareto’s Haavaldsen said.

Growth in exports may be curtailed because Persian Gulf energy-consumption is rising twice as fast the global average, meaning greater domestic demand, according to the U.S. Energy Department. And while overseas sales are expanding, demand for fuel shipments is shrinking both in China and Europe, which together account for about 32 percent of global oil consumption.

Still, signs of weakening demand aren’t halting the surge in Middle East refining and shipments. Traders booked 90.86 million metric tons of oil-product cargo to load from ports in the region on the spot market so far this year, compared with 76 million tons during the same period in 2013, lists of charters collated by Bloomberg show.

Persian Gulf states will account for half the fuel-processing capacity starting globally in the next year, according to JBC Energy GmbH, a Vienna-based consultant.

“All the new refining capacity popping up in the Middle East is positive for LRs,” Erik Nikolai Stavseth, an analyst at Arctic Securities ASA in Oslo, whose recommendations on shipping companies returned 22 percent in the past year, said by phone Sept. 19. “You’re looking at a more-favorable environment.”