Remains of a whaling ship discovered on a remote coral reef nearly 600 miles northwest of Honolulu, Hawaii are believed to be those of the second ship that inspired Herman Melville's classic 'Moby Dick.' 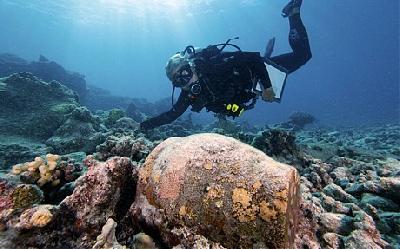 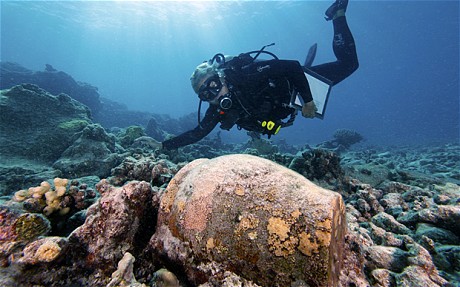 Remains of a whaling ship discovered on a remote coral reef nearly 600 miles northwest of Honolulu, Hawaii are believed to be those of the second ship that inspired Herman Melville's classic 'Moby Dick.'

According to marine archaeologists from the National Oceanic and Atmospheric Administration (NOAA), the shipwreck was that of the Two Brothers, the second ship captained by George Pollard which went down after it struck a coral reef during a storm in 1823.

News of the discovery was unveiled on Friday by the researchers that led the initial 2008 expedition to the wreck and subsequent exploration of the site. The official announcement was made during the 188th anniversary of the sinking of the Nantucket whaling ship.

The wreckage was discovered at the Papahanaumokuakea Marine National Monument in Hawaii—a US conservation area spanning nearly 140,000 square miles known for the diversity of coral reefs and marine life thriving in its waters. It is also known to be the location where the Battle of Midway was fought during World War II as well as the resting place of more than 120 different aircrafts and marine vessels.

Much of the wooden Nantucket whaling ship have disintegrated in the warm waters. However, researchers have been able to still retrieve a number of artifacts including harpoon tips and hooks, ceramics, and cast iron pots that have been once used to melt whale blubber for oil, BBC News reports.

"It was a very exciting find, in relatively shallow water," Kelly Gleason—a Maritime Archaeologist and leader of the expedition—told reporters. "[There are] not many places in the world [where] you could find a shipwreck of this significance, with these many artifacts scattered on the sea floor. Anywhere else in the world, a ship like this in 10 t0 20 feet of water probably would have been looted, or picked apart or just damaged by development."

This is the first discovery of a Nantucket whaler lost at sea, according to NOAA. It is also the most interesting because of its association to tragic seafaring figure George Pollard who captained the Two Brothers, and previously the Essex.

"I think it reminds us of what a global trade whaling was in the 1800s and how the sea ferrying activities transformed these islands with the westward expansion going on in the early 1800s," Gleason said. "We are really interested in the long term protection and interpreting the site and figuring out how to share this history with the public."

Captain Pollard gained national notoriety after the sinking of his first ship, the Essex, was hit by a sperm whale in 1821, which led Pollard and his crew to drift at sea for three months, resorting to cannibalism to stay alive during the ordeal.

After the Two Brothers went down, Pollard never captained a ship again and gave up whaling altogether. He spent the rest of his career as a night watchman in Nantucket.
The artifacts are undergoing conservations procedures in Chico, CA before they are to be placed on exhibit at the Hilo Discovery Center.

"To find the physical remains of something that seems to have been lost to time is pretty amazing," Nathaniel Philbrick—an author and historian who has done extensive research on the two ships captained by Pollard—said. "It just makes you realize these stories are more than stories. They're about real lives."