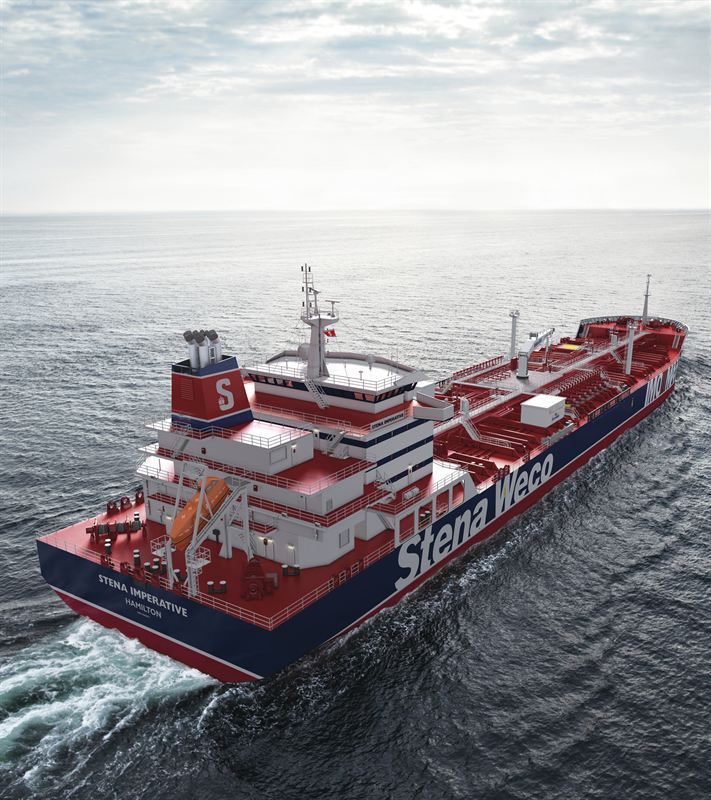 STENA BULK TAKES DELIVERY OF IMOIIMAX TANKER
Chemical and product tanker »Stena Imperative« has now been delivered from Chinese shipyard CSSC Offshore & Marine Engineering (CSSC OME) in Guangzhou. The IMOIIMAX tanker is equivalent in size to a 50,000 dwt MR tanker.
As Stena Bulk informs, the vessel is equipped with 18 tanks, each with a capacity of 3,000 m3, and can carry both vegetable oils and chemicals such as oil and petroleum products. Thanks to their innovative technical design, the IMOOIIMAX tankers have extra large cargo flexibility, high safety and low fuel consumption, the new owner says.
»Stena Imperative«, which is wholly owned by Stena Bulk, is the fifth in a series of ten tankers ordered by Stena Bulk in 2012. The first four vessels were delivered in 2015 and the remaining five will be delivered by 2017. The ship’s length is 183 m, with a beam of 32 m and a deadweight of 50,000 t.
In November last year, Stena Bulk placed a further order for the same vessel type, this time for three tankers with an option on a further two. Delivery of the first of these is planned for the end of 2017.
Stena Teknik and CSSC OME were jointly responsible for the technical development of the IMOIIMAX concept. The innovative design of the IMOIIMAX tankers means that, among other things, their fuel consumption at service speed is 10-20% lower than that of equivalent vessels, Stena Bulk says.
With an auto-tuning system, the combustion process in each cylinder oft he main engine is continuously controlled for optimal performance. The vessel is also equipped with an exhaust gas multi-inlet composite boiler, one of the very first to be installed. This boiler recovers energy from the main and auxiliary engines’ exhaust gas. The boiler has an oil-fired section that can be used in port, thus avoiding the need to run the larger oil-fired boilers to heat the vessel.
According to Stena Bulk, with the IMOIIMAX, the energy loss oft he propellers is recovered by fitting a Hub Vortex Absorbing Fin. The streamlined design of the accommodation and the bridge means that the IMOIIMAX is less affected by wind resistance than other similar vessels.
The tanks’ flushing system installed ensures that the cleansing process is optimised and since four tanks at a time can be flushed, the time between discharge and loading can be minimized.