Southeast marine pilots have been studying the vessels, modeling how they handle in Southeast waters. But the pilots are concerned about the maneuverability of one of the new arrivals. 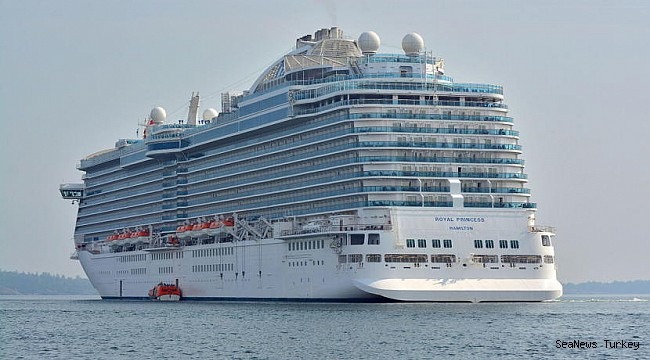 Cruise lines are bringing four megaships to Alaska this season. And Southeast marine pilots have been studying the vessels, modeling how they handle in Southeast waters. But the pilots are concerned about the maneuverability of one of the new arrivals.

As cruising gets more popular in Alaska, the size of the ships has increased. The vessels fly the flags of Panama, Bermuda, the Bahamas and other so-called “flags of convenience.” That way, the corporations that own them enjoy looser regulations and lower taxes.

Alaska requires these foreign-flagged vessels to take one of its state-licensed marine pilots on board. Capt. Jeff Baken is one of them.

“We go on board, we take control of the ship,” Baken told CoastAlaska in an interview last fall. “And we guide the ship through the waters the entire time they’re in Southeast Alaska.”

The Norwegian Bliss came calling in 2017, capable of carrying up to 5,700 passengers and crew. This year it’ll be joined by its sister ship. Other cruise lines are following suit: Royal Caribbean International’s 168,666-ton Ovation of the Seas — the largest ever to visit Alaska — is also expected. Add Princess Cruises’ flagship Royal Princess to make a total of four megaships this season.

“All of those ships are Azipod ships, which are very maneuverable,” Baken said in a past interview. “Except for the Royal Princess. She’s a conventional ship and, I will just say, less maneuverable.”

Southeast Alaska Pilots Association has tested the limits of each of the four megaships in virtual reality. It used computer models provided by the cruise lines — all except Princess Cruises.

That didn’t happen. Instead, an Alaska pilot spent nine days aboard Royal Princess. That data helped the pilots build their own model to run simulations.

The full report was released publicly this month.

“The recommendations in this study strictly limit port calls and necessitate restricted operating parameters to ensure safe operations of the Royal Princess in Southeast Alaska waters,” the report said.

None of the pilots CoastAlaska contacted were willing to talk about their findings.

Princess Cruises questioned the report’s results but said it would work closely with the marine pilots to ensure safe handling of the vessels in Southeast Alaska.

“While we appreciate SEAPA’s efforts to date, we believe the model they used to assess this ship requires further refinement,” Princess Cruises’ Keith Taylor, executive vice president of fleet operations, said in a statement. “There are three Royal Class ships operating safely around the globe, in many challenging navigational areas.”

So what might set the Royal Princess apart from other megaships? It uses standard propulsion: propellers and rudders.

The other three have Azipod propulsion.

“With an Azipod-style propulsion, the propeller is actually on a pod below the ship, and what you can do is rotate that pod,” explained Keir Moorhead, an engineer who teaches at California State University Maritime Academy in Vallejo.

“At any given moment, you can rotate a propeller 360 degrees to give you thrust in any direction,” Moorhead said.

Moorhead read through the pilots association’s findings about the Royal Princess’s “extremely poor low speed handling” during a week in the computer simulator at AVTEC in Seward.

“What does come up in the report is that the conventional cruise ship has issues at low speeds,” Moorhead noted. “And that’s because there isn’t enough water passing by the rudders to provide the turning force.”

For most cruise ships visiting this part of the world, Ketchikan is the first Alaska port of call. Getting into port requires passing through the 220-meter-wide Tongass Narrows. There’s not a lot of room to maneuver. And, there’s a 7-knot speed limit.

The pilots recommend against the Royal Princess attempting this in more than 15 knots of wind.

“Fifteen knots of wind in Ketchikan? I was stationed on a ship there. It blows 15 knots quite often,” Capt. Stephen White, commander of the Coast Guard’s Sector Juneau, said in a phone interview.

Southeast pilots recently forwarded their recommendations to the Coast Guard. They include using escorts and restricting other vessels when the megaships are maneuvering in port.

White said he’s been on several conference calls between cruise line representatives and the pilots association, and all sides are trying to figure out how to bring these larger ships into port safely. But he said for now the Coast Guard has no plans to change any of its rules or guidelines.

He said the Coast Guard will be relying on the judgment of the marine pilots, whom he said are “our most experienced most seasoned mariners out there on the water.”

It’s these pilots, White said, not the ship’s captain or anyone else, who decides whether it’s safe to bring a vessel into port.

“Here’s the real deal,” White said. “The pilot, the individual pilot, is the one where, in regulation and all that, has that power.”

Alaska is a hot cruise destination, with 1.3 million visitors projected this season. Royal Princess has been sailing elsewhere since 2013, but the company announced in late 2017 that it would be heading to Alaska this year.

Maritime law allows a cruise line to sail its ships wherever it sees fit. But Moorhead said he hopes any limitations of a ship’s design are properly taken into account.

“It would be ill-advised of a vessel owner to knowingly bring a vessel into a port where it can’t safely tie up,” Moorhead said.

The balance between the economic boost from cruise ship tourism and local impacts is an ongoing conversation. The arrival of the megaships is a new development.

“Everybody recognizes that, as the ships get bigger and bigger, they create more challenges for communities,” Rep. Dan Ortiz, an independent lawmaker from Ketchikan, said in a recent interview.

Ortiz is aware of the behind-the-scenes talks between pilots, cruise lines and the Coast Guard over how to ensure the safe passage of megaships in Alaska waters.

“Because while the industry brings a lot of hope to the overall economic improvement of coastal Alaska,” Ortiz said, “there’s also the realization that with that comes an added responsibility coming up with answers to these questions.”

The Royal Princess is scheduled to make the first of 19 visits to Southeast Alaska on May 13.