Somali Pirates Free 21 Crew Of Hijacked Vessel, Hold On To Four Others

The MT Gemini, a 29,871 deadweight tonne chemical tanker, has been released by Somali pirates 215 days after it was hijacked off African waters, Glory Ship Management Pte Ltd, a Singapore-registered company, said Thursday. 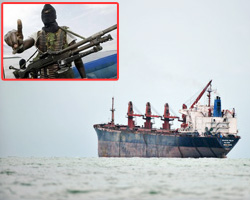 Glory Ship Management said in a statement that the pirates Wednesday released 21 of the 25 crew on board but took four South Korean seamen, including the captain, ashore at the last moment despite earlier promises to release the entire all-man crew.

The crew who were released comprise 13 from Indonesia, five from China and three from Myanmar, and all are in good physical health and have not been ill-treated, the company said.

The chemical tanker was carrying a cargo of over 28,000 tonnes of crude palm oil from Kuala Tanjung, Sumatra, Indonesia, on April 16 when it was hijacked.

"We are relieved that 21 of the crew have been released and are in good health. We will expedite their speedy return home.

"In the meantime, we are expending all efforts to secure the release of the four South Koreans still held hostage," Glory Ship Management said.

The 21 men released will be given a medical check before being brought home as soon as possible, the company said.

It requested that the crew be given privacy to reunite with their families.