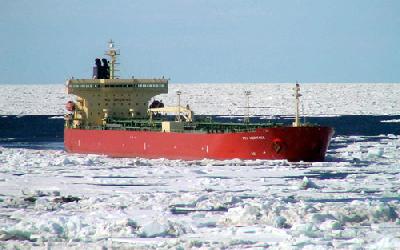 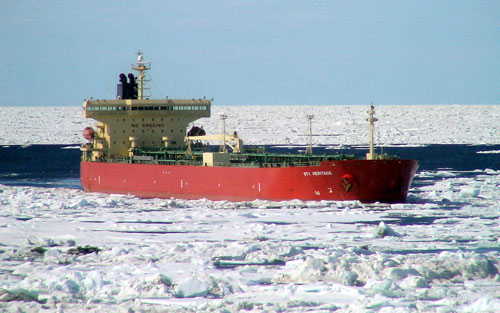 A tanker managed by Scorpio Ship Management s.a.m. recently completed a voyage from Vitino, Russia to Map Ta Phut, Thailand, via the Northern Sea Route (NSR) -- with the assistance of nuclear powered icebreakers. This is the first such voyage for a vessel managed by SSM.

The NSR, which connects the Atlantic to the Pacific Ocean via the Russian arctic coast, is only open occasionally for international commercial shipping and is navigable with the assistance of icebreakers from mid-summer to mid-autumn. In addition to gaining considerable savings in distance and fuel, by using the NSRP ships avoid both Suez Canal tolls and the risks of piracy in the Gulf of Aden and Indian Ocean region.

The Scorpio-managed ship, STI Heritage is a 73,956 dwt ice class 1A Panamax tanker. It operates in the Scorpio Panamax Tanker Pool and is registered in the Marshall Islands and ABS classed. Owned by Scorpio Tankers Inc. (NYSE: STNG), it is on time charter to Gard Shipping AS. She performed the NSR voyage under a charter to Novatek Gas and Power.

The planning for the voyage included a comprehensive risk assessment of the hazards associated with navigating high latitudes and ice as well as close collaboration with the flag state, ABS, charterers, NSR authorities, industry groups, and local operators. The vessel's Master, Captain Vlodymyr Podolskyy and his crew were selected for their skill and experience in navigating in heavy ice conditions.

The vessel departed Vitino on July 17  with a cargo of 61,000 t of stable gas concentrate produced by Novatek's Purovsky Gas Condensate Processing Plant in the Russian arctic. After stopping briefly at Murmansk, the vessel proceeded to the northern end of New Land area for her rendezvous with nuclear powered ice breaker Vaygach (45000) BHP). STI Heritage's NSR passage involved an ice advisor and the escort of one, at times two, ice breakers owned and operated by the Federal State Unitary Enterprise ("FSUE") ATOMFLOT, world leaders in the use of nuclear powered ice breakers. The STI Heritage arrived in the Bering Strait on July 29, having completed the NSR passage in a time of just 8 days. The vessel arrived at her final destination, Map Ta Phut, Thailand on August 16, 2011, completing the total voyage (from her previous discharge in Houston) of approximately 9,000 Miles.

The vessel and her crew received a letter of commendation from Capt. Vladimir Arutyunyan, Head of Fleet Operations Development Department at FSUE ATOMFLOT, which reads in part

"We are glad to outline that the tanker STI Heritage sails along the North Sea Route with confidence and deliberation. Please express on our behalf the greatest respect to the master of the STI Heritage for his outstanding professionalism. Only through joint efforts and total understanding shall we achieve positive results on the Northern Sea Route"

Emanuele Lauro, President of SSM and Chairman and Chief Executive Officer of vessel owners Scorpio Tankers Inc. remarked "This achievement is a first for SSM, and I congratulate Captain Podolskyy, his crew, and our marine professionals ashore on their skill, vigilance, and teamwork required to complete this unique voyage. The NSR passage of the STI Heritage is a reflection of all of the exemplary work carried out every day by Scorpio's men and women at sea and ashore; the creativity, dedication, and levels of collaboration between our vessels and our offices is critical to our objective of consistently high standards of execution."

Although, this NSR voyage was a first for SSM, it was not the first this season for a Novatek ship.  The Russian energy company plans to ship six or seven cargoes of stable gas condensate, produced by the Purovsky plant, to markets in the Asian-Pacific region via the NSR this season. Its first such shipment departed Murmansk on June 29 aboard the tanker Perseverance, carrying a cargo of 60 thousand tons of  stable gas condensate destined for consumers in China. In 2010, NOVATEK organized the historic voyage of a high-tonnage tanker (Aframax class), which delivered the company’s stable gas condensate from R Murmansk port to China’s Ningbo Port in 22 days, approximately half the time required by the traditional shipping route through the Suez Canal.