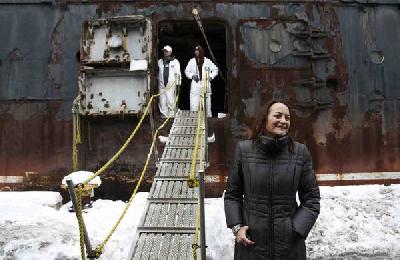 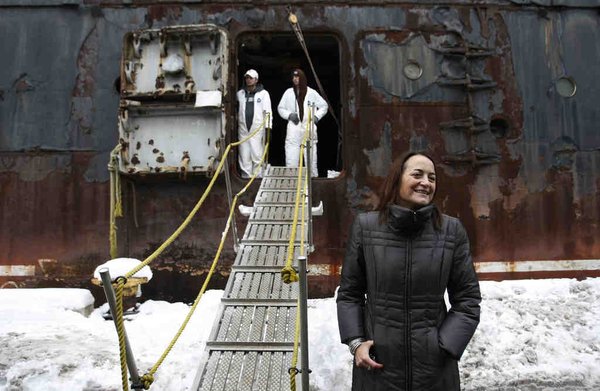 Once the fastest ocean liner to cross the Atlantic - and still holder of the westbound speed record - the 1,000-foot-long ship has been docked at Pier 82 on the Delaware River, just north of Oregon Avenue, since the late 1990s.

It was teetering on the brink of the scrapyard when philanthropist H.F. "Gerry" Lenfest stepped up last summer with $5.8 million to begin a serious effort to save the ship and give it a new, rust-free life.

The SS United States Conservancy - the nonprofit group that now owns the ship - used $3 million of the Lenfest money to acquire its prize from the Norwegian Cruise Line/Genting Hong Kong.

A boat scrapper offered twice as much, but NCL/Genting opted for the preservation group, said Susan Gibbs, president of the conservancy's board of directors.

"We are just so elated," said Gibbs, whose grandfather, Philadelphia native William Francis Gibbs, designed the ship. She spoke at a news conference in the restaurant of the Ikea store on Delaware Avenue, with a clear view of the ship's massive smokestacks across the street.

The conservancy now faces what Gibbs calls a "two-front battle."

First, public and private partners must be found to transform the ship into an "economically viable" mixed-use development. Talks are under way with potential partners in Philadelphia, New York City, and Miami. There are no guarantees that the ship will remain in Philadelphia, she said.

Second, a fund-raising campaign must begin.

An initial $1 million campaign was announced Tuesday, for funds that will help pay for deciding what needs to be done.

When 650,000 square feet of deteriorated ocean liner has been sitting dockside for a long, long time, there is a lot that needs to be done. Gibbs estimated cost of restoration as about $200 million.

On a brief tour through the dark and cold interior Monday, the enormity of the task was clear.

The interior has been stripped of appointments, paneling, and decorative elements. Peeling lead paint curls everywhere. Fortunately, the tons of asbestos that once sheathed pipes and served as fire blocks were removed about 20 years ago when the ship was in dry dock.

There are still PCBs, although the extent of the contamination is unclear; the conservancy is working with the Environmental Protection Agency on remediation.