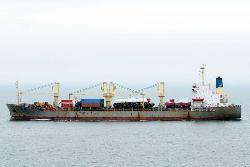 A deputy general manager of the company in Nigeria, Babatunde Joseph, disclosed this to Xinhua on telephone on Friday, saying the vessel had sailed into the port on Tuesday. "About 22:00 hours on Wednesday, four armed men came with a flying boat and used their rope to come on board the vessel," he told Xinhua. He said the hoodlums met the Chinese Commissar Duty officer and one of the crew members on board, adding that the operation lasted 15 minutes.

Joseph said the hoodlums were unable to shoot in order not to attract attention, adding however that the duty officer was severely beaten. He said the wounded officer had been taken to a hospital in Lagos.

He told Xinhua that the robbers made away with a walkie talkie, one mobile phone and some cabin keys of the vessel. The hoodlums, he added, were unable to enter the residential area of the vessel.

Port of Melbourne welcomes longest vessel to dock at VICT

US retailers to maintain high levels of imports through summer