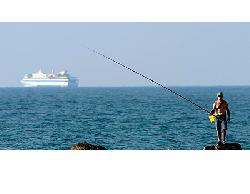 An officer and a soldier are suspected of selling goods they took from the highly controversial aid flotilla to Gaza, which was raided by the IDF on May 31, Ynet learned from the military police on Wednesday.

Investigators say they are currently trying to ascertain whether laptop computers were sold by a soldier to three other soldiers, and whether they were initially taken from the flotilla vessels by an officer.

A high-ranking officer familiar with the case said the suspicions are highly likely to prove true. "The investigation has just begun, but as it appears now it will prove embarrassing and shameful," another official said. "These are soldiers who don't understand what their uniform represents."

The investigation could prove extremely harmful to Israel as the state strives to fend off global criticism for the raid, which resulted in the deaths of nine Turkish citizens. Recently the Turkel committee, which is investigating the raid on behalf of the state, has called various leaders to testify before it, and a UN committee is not far behind.

The soldier suspected of selling the computers was arrested late Monday night, along with three soldiers suspected of buying them. In the process police say they discovered additional stolen goods in the soldier's possession, including more laptop computers and cellular phones.

Later an officer was arrested on suspicion he sold the goods to the soldier. The officer, a second-lieutenant in rank, is a commander of an army unit who had access to the ships while they docked at Ashdod port, awaiting their return to Turkey.

Police say the officer stole 4-6 laptops from the ship and then sold them to the soldier, who in turn sold them to three other soldiers two months ago. The three have already admitted to making the purchases during questioning, and the computers were confiscated by police. They were found to be brand new, and not meant for sale in Israel.

They also told interrogators that the soldier who sold them the goods told them they had been stolen from the flotilla ships, yet they did not pass the information on to their commanders. 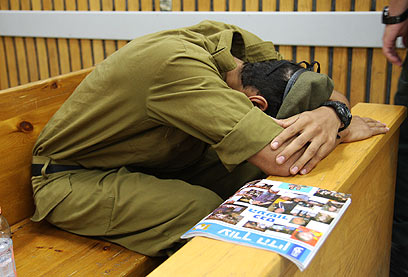 One of the suspects in court (Photo: Avishag Shaar-Yeshuv)

The soldier and officer have yet to appear before the court for a hearing on the remand of their arrests. Police say other soldiers are yet to be arrested, but refuse to give further details.

Meanwhile investigators are intent on discovering where exactly the goods came from, and whether they were stolen from flotilla passengers. One investigator said that if indeed the goods were found to belong to activists on board, they would be recompensed.

The IDF Spokesperson's Office confirmed reports of an investigation Wednesday, but said that it was "not at all certain the equipment was taken from the flotilla".

Complaints by flotilla passengers about stolen equipment surfaced not long after the raid. Activists told the British Guardian in June that credit cards confiscated by the IDF had been used.

The Guardian reported that soldiers had used the cards to purchase various items, including iPod accessories. Claims regarding calls made from confiscated cell phones followed.

The IDF responded to the claims by stating that all of the personal effects brought by the activists to Israel had been placed aboard planes that transported them from the country, but that audio and video cassettes had been confiscated for security reasons.

Trojan hero Aeneas' footsteps to be retraced by Turkish team