Somali pirates said on Saturday they had received a record ransom of $9.5 million for the release of Samho Dream, a South Korean oil supertanker they hijacked in the Indian Ocean in early April this year.

MOGADISHU (Reuters) - Somali pirates said on Saturday they had received a record ransom of $9.5 million for the release of Samho Dream, a South Korean oil supertanker they hijacked in the Indian Ocean in early April this year.

Andrew Mwangura, coordinator of the East African Seafarers Assistance Programme, confirmed the supertanker was free, and that a Singapore-registered ship with 19 Chinese sailors onboard hijacked in June in the Gulf of Aden had also been released. 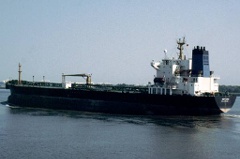 The Samho Dream, which can carry more than 2 million barrels of crude oil, was hijacked and its crew of five South Koreans and 19 Filipinos taken hostage, while carrying as much as $170 million worth of crude oil from Iraq to the United States.

Somalia has lacked an effective central government for almost two decades and is awash with weapons. The mayhem on land has allowed piracy to boom in the strategic waterways off its shores linking Europe to Asia and Africa.

The hijacked vessels are taken to the Somali coast and held until money is paid, although negotiations can take months.

"I can confirm Samho Dream is now free, but still in Somali waters," said Mwangura, who is based in the Kenyan Indian Ocean port of Mombasa. "It is a large ship and it's unlikely that it can dock in Mombasa, maybe it will dock somewhere along South Africa's coast or elsewhere to replenish its supplies."

He told Reuters the ransom paid for Samho Dream would be the highest paid out to the pirates since they started hijacking vessels in the past several years.

"They initially demanded $20 million. What I can confirm is that negotiators tell me they agreed to make the drop with an amount in excess of $9 million. This would be the highest sum paid out to pirates so far."

It was not immediately clear how much ransom had been paid for the Singapore-registered Golden Blessing. The ship was seized on its way from Saudi Arabia to India.

Mwangura said the actual ransoms would be confirmed later.

"This is the jackpot they have been looking for, it will encourage other youth to join in piracy or the supply of arms and technical ability to pirates," he said.

Somali pirates are making tens of millions of dollars in ransoms from seizing ships, including tankers and dry bulkers, in the Indian Ocean and the Gulf of Aden, despite the efforts of foreign navies to clamp down on such attacks.

"We received an amount of $9.5 million early in the morning, now we are dividing the ransom and will abandon the ship (soon)," a pirate who gave his name as Ali told Reuters earlier, referring to the ransom paid for Samho Dream.

"We have abandoned the ship and set it free and it is sailing away, the crew is safe," he said.

Yantian up from 45pc to 75pc of normal throughput pre-Covid