The escalating problem of piracy off the coast of Somalia is “completely unacceptable” and requires an urgent and coordinated response, United Nations Secretary-General Ban Ki-moon said at the launch (on 3 February 2011) of the International Maritime Organization (IMO)’s action plan to promote the 2011 IMO World Maritime Day theme: “Piracy: orchestrating the response” 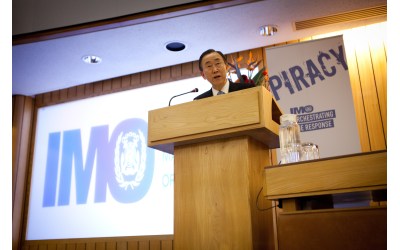 The escalating problem of piracy off the coast of Somalia is “completely unacceptable” and requires an urgent and coordinated response, United Nations Secretary-General Ban Ki-moon said at the launch (on 3 February 2011) of the International Maritime Organization (IMO)’s action plan to promote the 2011 IMO World Maritime Day theme: “Piracy: orchestrating the response”

Speaking at IMO’s London Headquarters, Mr Ban welcomed the decision of IMO to pay special attention to piracy during the year ahead. “This is a timely and important initiative,” he said.

IMO has been combating maritime piracy for some time and a series of measures, developed with the co-operation of the littoral States and the support of the industry, helped significantly reduce piracy in the hot spots of the late 1990s and the early 2000s: the South China Sea and the Straits of Malacca and Singapore.

However, the problem has lately manifested itself in other parts of the world, most notably – but not exclusively – off the coast of Somalia, in the Gulf of Aden and the wider Indian Ocean.

IMO Secretary-General Efthimios E. Mitropoulos said “piracy and kidnapping have blighted the maritime community for too long and it is seafarers who bear the brunt.” He added, “we believe that we can use the experience gained and the successes achieved in reducing piracy elsewhere to good effect in the current arena as well, but to do so requires a well orchestrated response.”

All echoed their support for this latest IMO initiative. Mr Fedotov said, “It is clear that the only viable long-term solution to the Somali piracy problem is to restore law and order in Somalia, including in its waters. It is also clear that this solution is some years off and will require concerted and coordinated international effort. UNODC’s counter-piracy programme focuses on supporting regional prosecutions and on rebuilding Somalia’s criminal justice capacity.”

Ms Sheeran focussed on the humanitarian aspect of the problem. Acknowledging the success of naval escorts in protecting food aid for Somalia, she also highlighted new challenges created by the worsening situation. “The presence of Somali pirates in an ever expanding area is of great concern because they threaten not just food bound for directly for Somalia, but our food transiting through the ports of Mombasa (Kenya), Dar es Salam (Tanzania) and Beira (Mozambique) for vital operations in Zimbabwe, the Democratic Republic of Congo and other places with great humanitarian needs.”

Speakers at the launch of IMO’s action plan also spoke of the economic cost of piracy. Mr. Ban said, “ransom payments adding up to hundreds of millions of dollars have created a ‘pirate economy’ in some areas of Somalia that make them more resistant to efforts to develop alternative livelihoods. Economies throughout East Africa and beyond are experiencing the fallout.”

Representing the shipping industry, Mr. Robert Lorenz-Meyer, President of the Baltic and International Maritime Council (BIMCO) said, “The attacks are not only attacks on ships, but also attacks on the global supply chain in one of the world’s most vital sea lanes. They threaten a supply line of vital interests to the international community.”
Mr. David Cockroft, General-Secretary of the International Transport Workers' Federation, representing seafarers, said many crew members were at breaking point because of the stress of passing through the area frequented by pirates. "If the risks cannot be eliminated, then seafarers will demand not to sail into the area at all and responsible ship owners will support them," he said.

Secretary-General Mitropoulos said IMO’s action plan aimed to make some genuine inroads into what, to date, has been an escalating problem.

“In the past 12 months alone”, he said, “there have been 286 piracy-related incidents off the coast of Somalia. They have resulted in 67 hijacked ships, with 1130 seafarers on board – whilst, at present, 714 seafarers are being held for ransom on board 30 ships scattered at various points of the country’s extensive coastline.”

• increase pressure at the political level to secure the release of all hostages being held by pirates;

• review and improve the IMO guidelines to Administrations and seafarers and promote compliance with industry best management practice and the recommended preventive, evasive and defensive measures ships should follow;
• promote greater levels of support from, and coordination with, navies;

• promote anti-piracy coordination and co-operation procedures between and among States, regions, organizations and industry;

• assist states to build capacity in piracy-infested regions of the world, and elsewhere, to deter, interdict and bring to justice those who commit acts of piracy and armed robbery against ships; and

• provide care for those attacked or hijacked by pirates and for their families.

Among other things, during 2011, IMO will focus on promoting further co-operation between and among States, regions and organizations in reducing the risk of attacks on ships through a variety of mechanisms including information-sharing; coordination of military and civil efforts; and development and implementation of regional initiatives, such as the IMO-led Djibouti Code of Conduct.

IMO’s action plan will build on efforts to tackle the problem that have been underway for some time. Through the Djibouti Code of Conduct, for example, information-sharing centres are being established in Yemen, Kenya and the United Republic of Tanzania, as well as a regional training centre in Djibouti. In partnership with the UNODC, IMO is helping to develop the legal framework necessary to prosecute pirates.

Mr Ban took the opportunity to emphasize where the real source of the piracy problem lies. “Although piracy manifests itself at sea,” he said “the roots of the problem are to be found ashore. This is a complex issue. But in essence, piracy is a criminal offence that is driven by economic hardship, and that flourishes in the absence of effective law enforcement.”

“The only truly successful way to address the problem in the long term,” said Mr Ban, “is through a strategy that focuses on deterrence, security, the rule of law and development. Our common goal must be a sustainable solution.”

In conclusion, Mr. Mitropoulos said: “This year, we are resolved to redouble our efforts and, in so doing, generate a broader, global response to modern-day piracy. More needs to be done if the ultimate goal of consigning piracy to the realms of history is to be achieved. We hope that our choice of theme for 2011 will provide an appropriate rallying point around which all those who can make a difference can focus their efforts.”