The containers with weapon-grade spent uranium fuel were heavily guarded by armed police on ground and in helicopters on its way to the harbor in Gydnia in Poland. After loaded onboard the vessel the deadly nuclear waste secretly sailed around the coast of Northern Norway before it arrived in Murmansk last week. 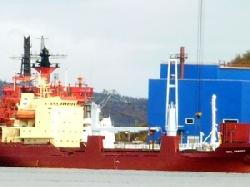 The containers with weapon-grade spent uranium fuel were heavily guarded by armed police on ground and in helicopters on its way to the harbor in Gydnia in Poland. After loaded onboard the vessel the deadly nuclear waste secretly sailed around the coast of Northern Norway before it arrived in Murmansk last week.

Heavily armed special police forces guarding the containers with the uranium fuel before it is onloaded to the vessel sailing it to Murmansk via the coast of Norway. Photo: National Nuclear Security Administration.

The uranium-cargo was sent from a research reactor in the forest outside Warsaw towards Russia’s top-secured reprocessing plant Mayak in the South-Urals.

There are likely two reasons why such nuclear cargo are shipped the longer route around Norway to Murmansk, instead of sailing the much shorter route through the Baltic Sea and St. Petersburg on its way to Mayak. First of all it is important to keep the vulnerable cargo as far away from possible terrorists as possible, and secondly because Murmansk has an excellent harbor facility for receiving such nuclear waste.

The harsh seas off the coast of northern Norway and Russia’s Kola Peninsula are not an easy attack point for al-Quaida or other non-state terrorist groups that might want to blow up or get access and steal weapon-grade uranium, such as this cargo from Poland.

The heavy security around the uranium cargo transport in Poland is in garish contrast to the civilian surveillance of the vessel that sailed northbound the coast of Northern Norway towards Murmansk.

The Norwegian Coastal Administration has a highly sophisticated Vessel Traffic Services (VTS) located in Vardø on the coast of the Barents Sea. The main task is to follow the traffic in Norwegian Economic Zone from mid-Norway to the Russian Economic Zone east of Finnmark.

- Vardø VTS has no overview of vessels that carry nuclear waste along the coast. Such vessels are sailing in transit outside Norwegian Territorial Waters and are smaller in size than vessels obligatory to call in to the Vessel Traffic Service, says the Officer on Duty when asked by BarentsObserver about last week’s nuclear cargo sailing off the coast of Northern Norway.

- Those in Norway that might have the overview of such vessels and cargo are the Norwegian Radiation Protection Authorities (NRPA), according to the Duty Officer in Vardø.

BarentsObserver then ask the same question to the NRPA:

- We know about several transports to Murmansk over the last year. The last transport arrived in Murmansk as scheduled last week. We have among others cooperation with the Norwegian Coastal Administration that follows the vessels traffic via the Automatic Identification Systems (AIS) along the coast of Norway and report to us when they know something about such transports, says Yngvar Bratvedt, Senior Adviser in the NRPA Department for Emergency Preparedness.

But at the surveillance centre in Vardø, they say they only have knowledge about vessels lager than 5000 gross tons. The vessel with nuclear waste sailing to Murmansk is 3600 gross tons.

According to information from Poland’s National Nuclear Security Administration, the containers with the highly enriched uranium was loaded onto the special designed cargo ship in the port of Gdynia on the Baltic Sea on September 26th and then sailed northbound.

Yngvar Bratved with the Norwegian Radiation Protection Authorities says to BarentsObserver that for security reasons they are reserved with specific information (about such nuclear cargo) before and during the voyages.

The first time such nuclear cargo sailed from Poland to Murmansk in transit along the coast of Norway was last fall. Then, the Norwegian Radiation Protection Authorities was not aware about the uranium load before being informed by BarentsObserver.

The issue was then bought up with Polish nuclear authorities and the following shippment in April this year happened with the knowledge of the Norwegian Authorities.

The vessel that sails the deadly cargo to Murmansk is "MCL Trader", a Russian civilian cargoship, which in Scandinavia most infamous because it ran aground near the Danish island of Bornholm in May 2008. Danish authorities arrested the vessel's captain and chief engineer for having been drunk.

Last week, at the same time as the nuclear waste cargo ship arrived in Murmansk, Norwegian and Russian authorities were sitting onboard the former nuclear powered icebreaker "Lenin" in Murmansk discussing nuclear safety cooperation between the two countries.

The participants at the annual meeting in the Norwegian-Russian nuclear safety commission also discussed Russia’s import of nuclear waste to Murmansk with vessels sailing along the coast of Norway, according to a statement posted at the portal of the Norwegian Ministry of Foreign Affairs.

Nothing is said about the fact that simultaneously a secret cargo of nuclear waste was arriving in the port of Atomflot, just some few kilometers from where the Norwegian-Russian top nuclear officials where meeting.

Norway has over the last 16 years granted some NOK 1,5 billion (€187 million) for nuclear safety in Northwest Russia. Ironically, the harbor facility where last week’s nuclear cargo was offloaded is partly financed with Norwegian assistance grants. Norway partly paid for the special designed pad for uranium fuel containers as an effort to secure spent nuclear fuel from the Northern fleet’s decommissioned submarines.

Upon arrival at the Atomflot facilities in the northern part of Murmansk city, the uranium fuel was reloaded to railway wagons and sent all the 3,000 kilometers through European Russia to Mayak.

The shipment of spent fuel - highly enriched uranium – is part of a global effort to secure materials that in wrong hands can be converted to nuclear weapons. Since 9/11, the U.S. government and other G8 countries have been worried that terrorists could steal this material or buy it from corrupt insiders at the often remote located research reactors around the world.

Most research reactors got their uranium fuel either from the U.S., or like Poland, from the USSR during the Cold War. It is the USSR-origin fuel that now is on its way back to Russia via the coast of Norway to Murmansk.

According to Monday’s edition of Telegraph in London, nuclear cargo from Poland to Murmansk in transit off the coast of Norway have taken place five times over the last year. The newspaper writes that the total amount of highly enriched uranium is enough to make 18 nuclear weapons.

This week’s edition of the science magazine Nature has a longer article about the challenges related to spent nuclear fuel from the hundreds of research reactors around the globe.