WHILE Russia spends US$4 billion to upgrade its Asia-Europe Northern Sea Route, traffic on the route is declining because of a lack of anticipated global warming. 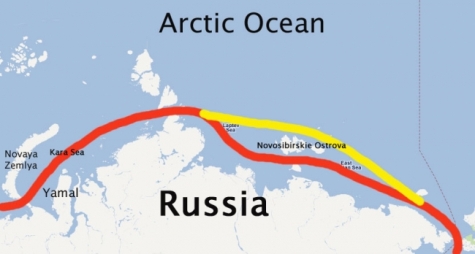 WHILE Russia spends US$4 billion to upgrade its Asia-Europe Northern Sea Route, traffic on the route is declining because of a lack of anticipated global warming.

But this is still only one per cent of what goes through the Suez Canal.

"We have to admit that it hasn't been used very much so far," said Russian Prime Minister Dmitry Medvedev, while meeting Barents regional governors, who want the upgrade as Arctic shipping plummets.

Around 600 permits are issued annually for shipping along the Northern Sea Route, and the annual volume of cargo is about four million tons, said Deputy Prime Minister Arkady Dvorkovich.

"The estimated potential for the coming 15 years is more than 80 million tons, which means a 20 times increase," Mr Dvorkovich said.

Mr Dvorkovich's goal to reach 80 million tons of cargo along the Northern Sea Route by 2020 might be too optimistic, but there ways to increase over the coming years.

The recently opened Port of Sabetta in the Ob Bay on the shores of the Kara Sea has a potential of 16.5 million tons per year, said the report.

Sabetta is supposed to become a hub on the Northern Sea Route for exporting gas from the Yamal peninsula as well as Siberian grain, metals from the Urals, coal from Kuzbass and oil from Tatarstan and Bashkortostan.

In addition, Russia has started export of oil from the Novoportovskoye field. This export is expected to increase to five million tons annually.

Deputy Prime Minister Dmitry Rogozin, who heads Russia's Arctic Commission, earlier said that the overall investments in Arctic for the period 2015 to 2020 will amount US$4 billion.

Lufthansa first half profit falls 99.1pc to US$4.1 billion as sales fall 52pc

US soothes feuding Japan and South Korea to unite on China