Nissan has stepped up to the eco-plate, by building an eco-friendly ship on which to transport their eco-friendly Leaf electric vehicles across Europe. 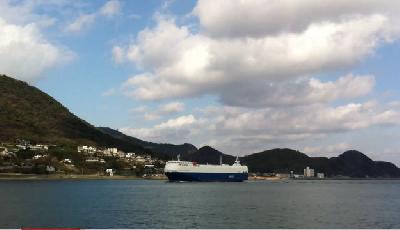 Now things are getting interesting in the world of eco-friendly transportation - beyond the environmental impact of the car you drive.

Nissan has stepped up to the eco-plate, by building an eco-friendly ship on which to transport their eco-friendly Leaf electric vehicles across Europe.

The ship, which appears to be dubbed "The City of St. Petersburg," has an unusual design that is expected to reduce fuel consumption by 800 tons. That's the equivalent of 2,500 tons of CO2 emissions per year.
That is good news, considering findings by the British newspaper The Guardian. That publication reported in 2009 that the pollution and subsequent health risks from the global shipping industry are grossly understated. They also reported that one giant container ship pollutes the air as much as 50 million cars. You are indeed reading that correctly: 50 million cars.

These ships are emitting CO2 as well as sulfur, soot and particles that stick in human lungs and cause all illnesses.  Plus, A car driven 9,000 miles a year emits 3.5 ounces of sulfur oxides--while the engine in a large cargo ship produces 5,500 tons.

According to Nissan, "The City of St. Petersburg" can accommodate 2,000 cars and weighs 21,000 tons. The reduction in waste can be attributed to its design, which cuts air resistance nearly 50 percent.
“You can say that the ship’s spherical prow design is the world’s first. Thanks to this aerodynamic design we expect to see a substantial reduction in the ship’s fuel consumption,” said Satoshi Yako, Senior Mgr., Supply Chain Management, Nissan Motors.

This is a great step towards reducing pollution and waste, and being more efficient. The “City of St. Petersburg” does not seem to be running on any different fuel, however. Most ships run on Bunker Fuel, which, according to greencarreports.com, "is pretty much the dirtiest liquid fuel around. It's brown or black, and frequently so thick or sludgy it barely flows. Imagine cargo ships burning liquid asphalt, and you wouldn't be far off. Among other things, bunker fuel has up to 2000 times the sulfur permitted in the diesel fuel that's used for road vehicles. Compared to this stuff, gasoline is as carefully crafted as the finest French champagne."

Dealing with Bunker Fuel comes next, we say! In the immediate, hats off to Nissan for taking shipping to the next level of eco-cool!