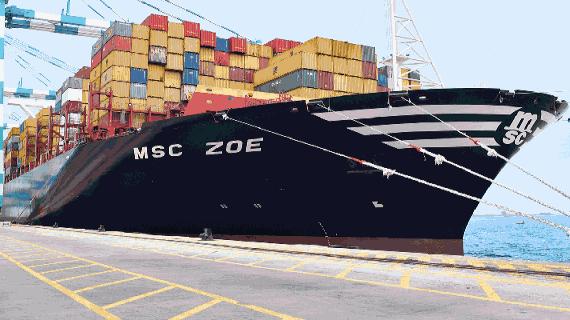 He said that if ships had not yet grown to their maximum size, they were close to it, Lloyd's List reported. "There's another 20 per cent growth possible, taking ships up to 24,000-26,000 TEU, but beyond that it gets to a point of diminishing returns."

At the same conference, DP World commercial manager Youhan Doctor said Middle East ports were adding 11 million TEU in handling capacity over the next five years to deal with such titans of the shipping world.

"The number of TEU handled per metre of quay length has fallen 16 per cent and the TEU per loading is down 12 per cent due to mega-vessels," he said.

Most terminals could handle only three to four mainline vessels and one feeder at a time, putting pressure on yard space and terminal operations. The impact on ports was not just on quayside, where wider, higher cranes were needed, Mr Doctor said. "The landside also needs development. You can't just discharge boxes. You also need yard space."

Vessels of over 14,000 TEU make up only three per cent of all port calls in Asia while ships of over 10,000 TEU are responsible for 12 per cent of visits.

"Ports used to complain about too many small ships calling," Mr Lane said. "Now they are saying there are too many big ships. They may want to only have 6,000-TEU vessels calling, but that is not the reality."

Nevertheless, he did point out that slot costs savings are starting to reach a plateau where adding more capacity to ships isn't going to have any cost benefits.

"Every time you raise the size of a ship you reduce the slot cost, but it is not a linear curve," Mr Lane said. "When you add 3,000 TEU to a 9,000-TEU vessel you increase your capacity by 33 per cent, but you only reduce your costs by 19 per cent. The more you add, the more the gap widens."