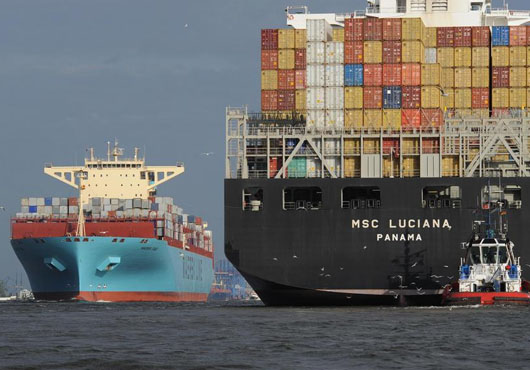 These loops replace existing services CSW for MOL and Ipanema for MSC (with Hamburg Sud) and with Maersk Line leaving the two ASAS operations in which it currently co-operates with China Shipping, CMA CGM, Hamburg Sud, Hanjin and Hapag-Lloyd.

One will be operated by Maersk and MSC, contributing six ships each, the other by MOL.

Dynaliners said the withdrawal of Maersk Line's five ships from ASAS, is likely to trigger change to this two-loop network, which furthermore employs two ships of China Shipping, three of CMA CGM, seven of Hamburg Sud, one from Hanjin and six of Hapag-Lloyd.

There are two more services in the Far East-ECSA trade, one of which, coded SSA, has recently been revised with a new itinerary and a new partner (Yang Ming replacing NYK). At the same moment, carriers involved in these two loops, furthermore encompassing Hyundai, "K" Line, CMA CGM, Cosco, Evergreen and Zim, established a slot exchange agreement.