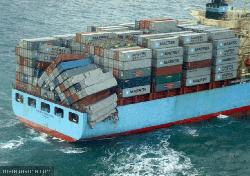 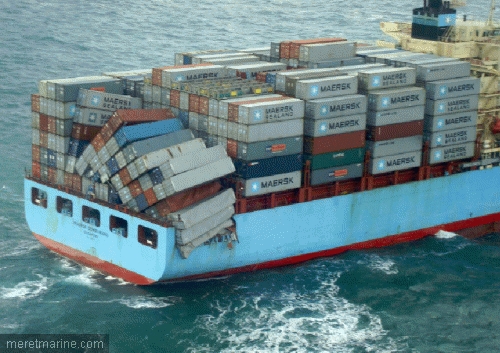 With the last collapsed row of containers from the stern as the Maersk Sembawang on Wednesday joined the Port of Le Havre, to conduct a re-stowage of cargo. The ship, which faced the powerful storm that swept through the Gulf of Biscay earlier this week had reported on Tuesday the loss of containers. Some of the supplies were, moreover, more fully insured due to a rupture of referrals. Informed of the situation, the maritime prefecture of the Channel and North Sea has remained the owner to stop the danger of his ship before it reaches the Strait of Pas-de-Calais. Departured from Colombo, Sri Lanka, Maersk Sembawang indeed headed to the Belgian port of Zeebrugge. Given the condition of cargo on deck, the French authorities feared the fall of new containers and risks of pollution and collisions. The "Premar" therefore ordered the captain to win a French port to re-align its clubs.

"The formal occurred on Tuesday at 2 o'clock in the morning. The ship's captain and owner were very cooperative and relations were excellent, "acknowledges the Navy.

Upon his arrival in the waiting area of the port of Le Havre, the Maersk Sembawang has been inspected.  Two officers of the Centre for Security of Ships (CSN) and an officer of the Grand Port of Le Havre on board were airlifted by the Dragon 76 of the Safety Car.  In all, the ship would have lost because of the storm, a total of 26 containers, 47 other boxes being damaged.

Container recent Maersk Sembawang was delivered in 2007 to the Danish company Maersk Line, the world leader in container shipping. Registered in Singapore, with 25 crew, this ship is 319 meters long with a width of 40 meters. On a deadweight of 85,000 tonnes, can carry 6,478 TEUs (Twenty Feet Equivalent, standard size of container).