Home OPINION Macro Economics - 2013 GDP development is not as expected

Macro Economics - 2013 GDP development is not as expected

The 2013 GDP growth appears on a par with 2012, but is still not picking up speed. Global economy: And so it did happen – 2013 was expected to turn the sour circle round and bring forth a year with a higher growth rate than that of 2012 . 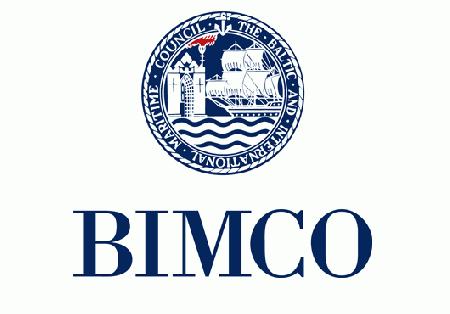 25 August 2013 - 13:19
Macro Economics - 2013 GDP development is not as expected
The 2013 GDP growth appears on a par with 2012, but is still not picking up speed. Global economy: And so it did happen – 2013 was expected to turn the sour circle round and bring forth a year with a higher growth rate than that of 2012 – but it is about to evaporate in the Summer heat. Like a Tour de France rider running low on sugar, the global economy seems to be in need of carbohydrates even if there is a small bill to pay – it may be worth it all in the end.
Right now the carbohydrates that PM Abe is providing for the Japanese economy seem to be working. No illegal substances are contained in the prescription written out for the patient, some of the medicine may only have been tested a few places before, but is now being applied full scale to turn the nation into a winner. In the meantime, something stronger may be needed across the Pacific, as the US economy is displaying some faintness in its recovery-armour.
By mid-July, the IMF “blew the whistle” and projected very uneven distribution of growth projections for 2013. Japan is upwardly revised by 0.5% point, now at 2.0%, whereas the US and the Euro Area are seen to be lower by 0.2% points, now at 1.7% and -0.6% respectively.World Trade volumes of services and goods are also expected to come in lower than the Fund anticipated back in April.The bottom line is that world output is now projected to be on a par with 2012 due to growing pains and materialising downside risks. 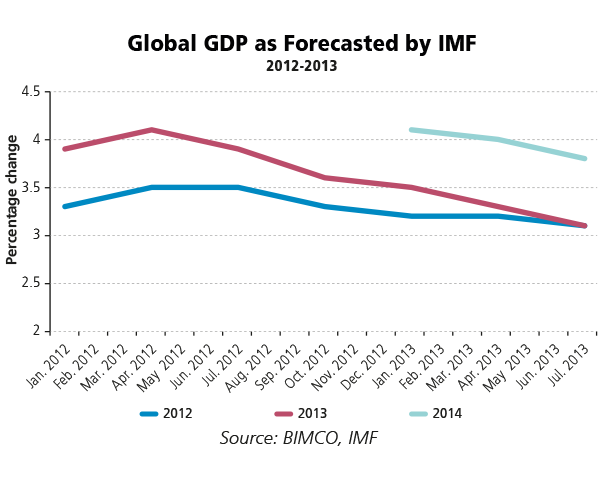 All three major economic zones (US, Europe and Asia) contributed negatively to the downgrading of global growth prospects.
So what happened?
Three factors come to mind:
1) Growth continued to disappoint in major emerging market economies (e.g. China, Russia, South Africa), reflecting, amongst other things, slower external demand growth, lower commodity prices and financial stability concerns;
2) The recession in Europe and the Euro area was deeper than expected. This resulted in low demand, depressed confidence and weak balance sheets (in certain nations) interacted to exacerbate the effects on growth and the impact of tight fiscal and financial conditions;
3) The US economy grew at a slower pace than expected, as stronger fiscal contraction was outweighing an improving private demand situation. At the other end of the spectrum, growth in Japan was stronger than anticipated, pulled forward by private and public consumption and improved net exports.
US:In the US the recent, weaker than expected, GDP growth had a dampening effect on the discussion about when to roll back the powerful monetary expansionary policy, at least for a while.Twice-revised first quarter growth in the US came in at 1.1%, which was significantly lower than the flash estimate of 2.4%. Growth was impacted by restrained consumer spending, a low level of business investment and declining exports. Flash estimates of GDP growth in Q2 came in at 1.7%, beating the Bloomberg economist panel estimate of 1.0%.
Growth was driven by inventory-building as consumer spending cooled. During the second half of the year, consumer spending is expected to pick up.One of the central indicators for the US Central Bank is the development of the labour market. Following a positive development since the peak at 10% in October 2009, the level of unemployment has stagnated from February to June.
July figures thus came as a positive surprise; the rate now stands at 7.4%. Back in 2006 and 2007 the unemployment rate stood at 4.4%. Whereas that is hardly the target for the Central Bank, the other economic conditions must also prove sustainable before the expansionary monetary policy is shown the door.Asia:In Asia, the limelight remains on Japan as PM Abe’s ruling coalition now holds control of both houses of parliament following the July 20 election. This can be seen as public approval of his turn-around policy that is set out to put an end to decades of poor Japanese national economic development.In the meantime, across the East China Sea, the growth-accustomed China is experiencing more tepid GDP growth than most observers expected in Q2 at 7.5%.
If judged by activity in the manufacturing sector it is first and foremost the smaller- to medium-sized companies in the private sector which feel the heat of lower production and a decreasing number of new orders, both domestically and for exports. The result is a declining employment level, something that is surely worrying in Beijing, where the government is busy dealing with a minor credit crunch.The new leadership in China seems willing to accept lower GDP growth in the ongoing reform process in order to lift the medium to long term economic potential of the nation. 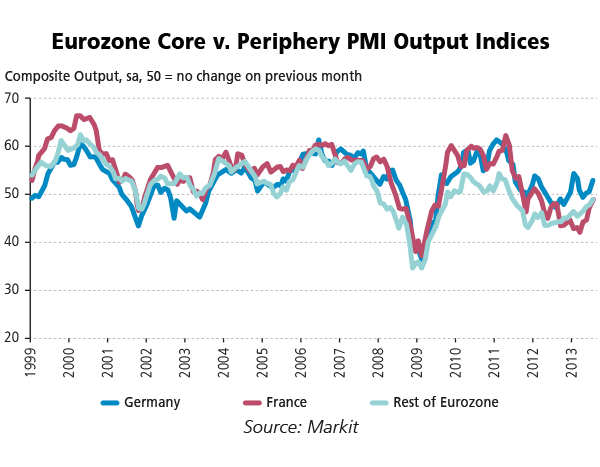 But the labour market is vital in China too – so the balancing act continues, as China could see the slowest GDP growth since 1989/1990. This is not to mention the knock-on effects that could spill over from the eventual exit from quantitative easing policies around the world.EU: Finally some good economic news is coming out of Europe. Allow yourself a short pause to stop and think about that. For global growth it is vital to get Europe up and running and it appears as if even the hard-hit Euro Zone periphery nations and struggling core nations have all improved in the last four months. In total, this has lifted the Markit Eurozone PMI Composite Output Index above the 50.0 no-change level for the first time in January 2012.
It is especially the manufacturing sector that pulled the index back into positive territory as output increases by the fastest pace in two years. Activity in the manufacturing sector is buoyed by falling input prices and rising demand.What remain to be seen are improvements in the labour market, as the service sector also fails to deliver anything but job cuts. The sub-index is moving in the right direction though, letting us know that employment declined at the slowest pace since March 2012.Outlook:We need to rev up the biggest engine of them all: the United States.
Much has been done, even more has been said, but a sustainable recovery has not yet arrived anywhere in the advanced economies of the world.Amongst the new risks is the possibility of a longer growth slowdown in emerging market economies. A less loose monetary policy in China and later also in the US is unfortunately likely to become more powerful on an economic international scale than the positive effects stemming from the expansion of the monetary base in Japan.Right now, the euro area is expected to return to positive growth next year leaving a couple of uncomfortable years behind. Let us hope that forecast can stand the test of time.
This news 13452 hits received.