Israeli commandos fired 308 live bullets aboard the Gaza-bound aid ship in May at passengers, Israel's top general said. The Israeli commission looking into a deadly raid on a Turkish aid flotilla last May has on Sunday questioned the country's military chief for a second time. 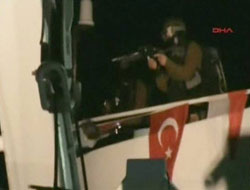 The Israeli commission looking into a deadly raid on a Turkish aid flotilla last May has on Sunday questioned the country's military chief for a second time.

With Sunday's testimony, Lt. Gen. Gabi Ashkenazi became the first witness summoned by the panel for a second time.

In a second round of testimony before a state-appointed inquest, Lieutenant-General Gabi Ashkenazi defended the navy's killing of nine Turkish activists on the aid ship Mavi Marmara had been "unavoidable."

Marine commandos were equipped with riot-dispersal gear but quickly switched to live fire to confront "armed passengers" because if they had not done this, there would have been more casualties, Ashkenazi told the six-member Turkel Commission.

Ankara wants compensation and an apology from Israel.

Ashkenazi said 308 live rounds were fired by the troops.

That appeared consistent with Turkish forensic findings that the nine dead activists were shot a total of 30 times, and there were gunshot wounds among another 24 passengers who were hurt.

The Mavi Marmara and five other ships in international waters were trying to break an Israeli blockade of the Gaza Strip when they were attacked.

Nine people, including eight Turkish and one 19-year-old U.S. citizen Furkan Dogan of Turkish descent, died when Israeli forces raided a Gaza-bound aid flotilla on May 31. Around 30 people were wounded in the attack.

The mission's report reveals that "Furkan Dogan was filming with a small video camera on the top deck of the Mavi Marmara when he was shot twice in the head, once in the back and in the left leg and foot and that he was shot in the face at point blank range while lying on the ground."

The report says "Dogan had apparently been "lying on the deck in a conscious or semi-conscious, state for some time" before being shot in his face.

The forensic evidence that establishes that fact is "tattooing around the wound in his face," indicating that the shot was "delivered at point blank range." The report describes the forensic evidence as showing that "the trajectory of the wound, from bottom to top, together with a vital abrasion to the left shoulder that could be consistent with the bullet exit point, is compatible with the shot being received while he was lying on the ground on his back."

Turkey's Foreign Minister had dismissed internal Israeli probe over deadly Gaza ship attack, saying "The fact that a defendant is both prosecutor and judge, constitutes contradiction to law."

There has been widespread public outrage in Turkey over Israel's murders of citizens.