CMA CGM wins over shareholders to buy loss-making NOL for US$2.4 billion
Home PILOTAGE Investigations against master and pilot of Emsmoon

Investigations against master and pilot of Emsmoon

The water police in Emden launched an investigation against the 53-year old Russian master of the "Ems Moon" and the 57 year old pilot due to endangering ship and railway traffic. The porsecutors in Aurich will decide about a safety fine on Dec 7. Both men refused to be interrogated by the authorities. 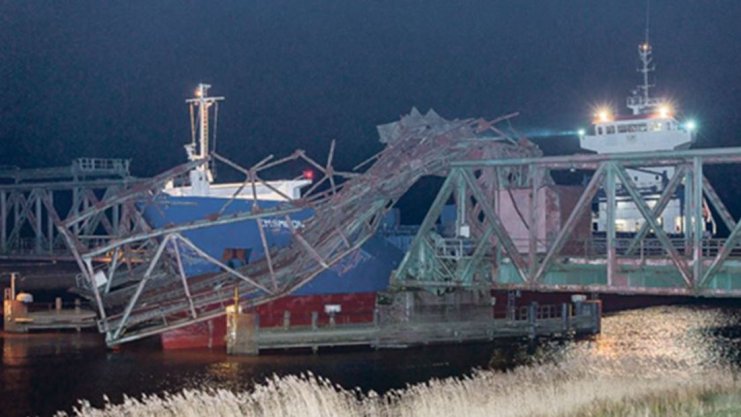 Destroyed Friesenbrücke: ship had no defects
The cause of the accident, in which a cargo ship tore the Friesenbrücke in Weener (Leer district) into two parts, further remains unclear. As announced Karsten Wolf by the competent central police headquarters in Hannover, on the ship no deficiencies have been found. A technical defect in question is not come as a cause of accidents so. The investigation had been completed, re-released the ship. However, still can not drive off the freighter from Papenburg, because the main shipping port of Friesenbrücke is still blocked. Infected human error behind the total loss in the millions? According to Wolf, the "can not be excluded".

Bridge is irreparably damaged
In the accident on Thursday night, the freighter had rammed the Friesenbrücke district Leer with full force. The middle part of the railroad bascule bridge was to be strongly affected, parts of the historical building were demolished. The entire bridge was moved by the collision even by a few meters. Injured did not exist. At the time of the collision, the bascule bridge was closed. "According to current findings, the bridge is irreparably damaged," said Egbert Meyer Lovis, spokesman for Deutsche Bahn, is the registered owner of Friesenbrücke. A new building will take years. Both the mobile and the machine-technical part have been destroyed. This would give the investigation of the emergency teams of Deutsche Bahn. It is still unclear how it came to the disaster.
Smaller inland waterway vessels have again free ride
After all, the EMS is passable for inland waterway vessels with a maximum height of four meters again since early Friday afternoon. You can go loud Water and Shipping Authority by the time allotted for the smaller vessels opening of the bridge. The authority in Emden you go currently assume that the waterways can be released again for seagoing vessels in the coming week. The plan, as head of agency Reinhard de Boer, which completely destroyed middle part of the bridge - similar to the passages of the cruise ships at Meyer Werft - excavate using a floating crane. This will be done over the next week.
10,000 ships per year
On average navigate according to the Waterways and Shipping Office 10,000 vessels in the lower Ems. The were 30 ships per day, of which 28 inland waterway vessels. Since the accident at the Friesenbrücke only two ships at the bridge would have waited, most were informed in good time and could have taken detours via Küstenkanal or Hunte.
Haul empty Groningen banned until further notice
Impact of the accident for the rail transport: The railway bridge is no longer passable, and which is expected for a long time. "The tracks are completely destroyed, and the whole bridge needs to be re-done," said a spokesman for the Water Police. When the run from the British rail subsidiary Arriva route between Leer and the Dutch city of Groningen is released again, is unclear. As a replacement buses.
Police questioned crew and pilot
Once the cargo had been released from the bridge, he was dragged back to Papenburg. There, the river police interviewed Friday morning, the crew of the ship. Also pilot and bridge guards were interrogated to clarify the cause of the accident. Initial results there should be early next week. For the time being the Havarist must not leave the port. The 112-meter-long sea-going ship "Emsmoon", flying the flag of Antigua and Barbuda, had according to the website  "Marine Traffic" Papenburg leave 18 clock towards the North Sea. It was built of cargo in 2000, the home port is St. John's, the capital of Antigua.
"It's created a huge damage"
After a cargo ship rammed the Friesenbrücke in Weener, search investigators about the reason. The damage amounts to, according to a police spokesman at several million euros.
Landmarks and bottleneck
The Friesenbrücke, 335 meters long and four meters high, is a symbol of the region. It was inaugurated in 1926 and is considered one of the longest bascule bridges of railway in Germany. During World War II it was destroyed; 1951 but rebuilt. For transfers of vessels in Papenburg Meyer Werft, the building is the bottleneck: The passage width is only 25 meters. Therefore, the bridge will be posted by Fries a floating crane when the cruise giant pass the Ems.
Meyer Werft for the time being not affected
The Meyer Werft is hardly affected by the damaged Friesenbrücke time being. How Werft spokesman Peter Hackmann told NDR on request, steel and other building materials were delivered almost exclusively by road and rail. However, the yard still hopes for a speedy elimination of the problem, because in March next year anstehe the next overpass.