The coast guard has launched a chase on the high seas for a merchant vessel, which reportedly left the Mumbai port without discharging cargo worth $1.7 million (Rs7.7 crore). 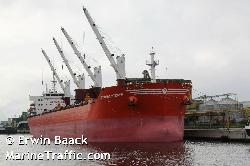 The coast guard has launched a chase on the high seas for a merchant vessel, which reportedly left the Mumbai port without discharging cargo worth $1.7 million (Rs7.7 crore).  The vessel Dynamic Strike had come to the Mumbai port from Croatia on October 28. It is a Panama flagged vessel and had been anchored at the Mumbai port since then.

Deputy commissioner of police, port zone, Quaiser Khalid said, “The vessel was carrying cargo coal needed by heavy industries and it was to be discharged at the port for Ispat industries. On Monday evening, around 4.15pm, the vessel left the Mumbai port without informing the consignee or the port authority officials. Also the cargo was not discharged so officials from Ispat have approached the Marine police to take action against the vessel crew and its agents.” A case was registered on Monday late evening under the various sections of shipping laws, cheating and breach of trust. Marine police officials have summoned the local agents of the vessel who will be questioned by the police team at Yellow Gate police station.

Meanwhile, port trust official alerted the coast guard, western region, and a search was launched. High speed interceptor craft, high speed patrol vessels and also aircraft was sent in search of the vessel, which is said to have sailed towards Gujarat and it is feared that it may try to cross the Indian territorial waters. If it succeeds, India won’t be able to take any action against it in international waters.

"Naval warship INS Angre fired warning shots ahead of the fleeing merchant ship's bow and stopped it. It is being escorted back to Mumbai," a defence spokesperson said.

The joint operation by Navy and Coast Guard followed a police complaint about the merchant ship fleeing Mumbai port without completing necessary formalities, the spokesperson said.
Initially, efforts to establish contacts with the fleeing ship failed as it had switched off the communication system on board.
Press Trust of India
'Rouge' ship intercepted, proceeds towards Mumbai
23 Nov 2010, 1128 hrs IST
The Navy on Tuesday (November 23) intercepted a Bahamas-flagged merchant vessel -- MV Dynamic Striker, which was heading towards Pakistan waters. After intensive efforts to intercept the ship with the assistance of the coast guards and choppers from Daman, the Navy ordered the 'rogue' ship to turn back towards Mumbai.
The navy is escorting the ship to Mumbai Port. As soon as it arrives, it will be handed over to the coast guard.
The Navy and the Coast guard have intercepted the Bahamas-flagged merchant vessel after it went missing on Monday from the Mumbai port trust.
The ship was carrying metallic coal but failed to offload its cargo in Mumbai. The ship was likely to move to Dubai and other areas including Pakistan. The rogue ship was shadowed for a long time and the fishermen were asked to stay at bay.
The ship did not stop despite several warning from the navy. Finally, INS Array fired a warning shot following which the ship stopped. On their arrival at the Mumbai port, the coastal authorities would investigate the content carried on board as well as would interrogate the crew members. 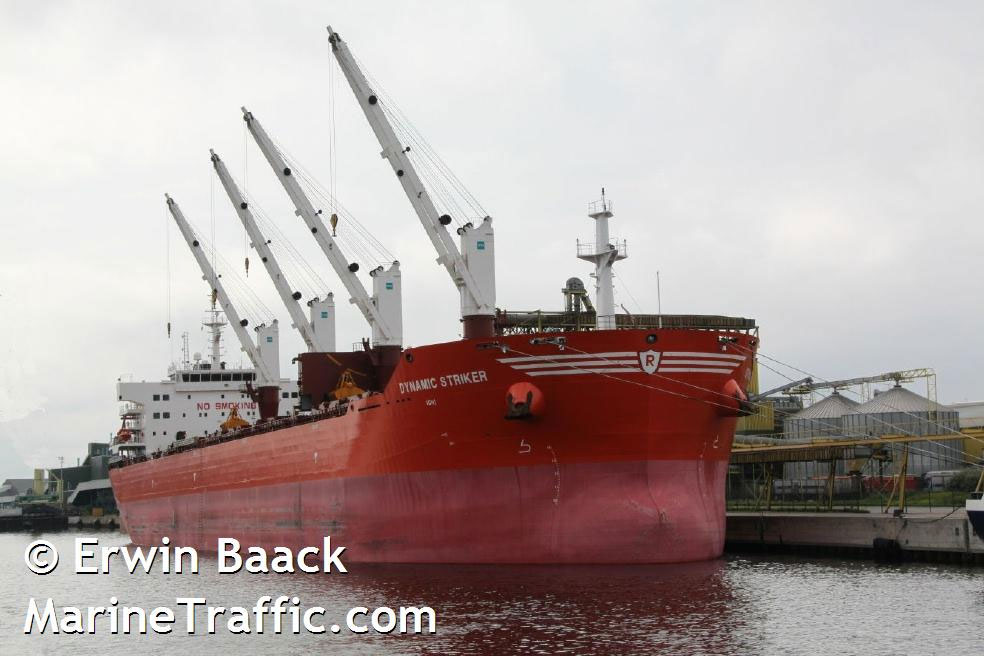 Dynamic Striker IMO 9493652, dwt 57000, built 2010, flag Bahamas, operator Enterprises Shipping & Trading S.A. Athens.
Comment:
Knowing general situation in India ports we may not be much surprised at this flee – vessel arrived Mumbai Oct 28 and stayed there ever since, without discharging. Either there was some dispute, or maybe cargo owner preferred delay, or something else – but vessel just can’t ran away without some sound reasons. Indian media didn’t try to dig in deeper and find out what was the reason, but there definitely was. I personally, wish bulk carrier and her crew good luck and succesful escape.
Mikhail Voytenko