Ms. Mayte Medina (United States) was elected Chair at the start of the session, following the resignation of the long-serving previous Chair, Mr. Brad Groves (Australia) at the end of last year. Mr. Theofilos Mozas (Greece) was elected as Vice Chair for 2021.

The foundations for the future development of a regulatory framework for Maritime Autonomous Surface Ships (MASS) will be laid at the 103rd session of IMO’s Maritime Safety Committee (MSC), held in remote session from 5 to14 May 2021.  The Committee will consider the outcome of a regulatory scoping exercise on MASS carried out over the last couple of years and identify priorities for further work. In addition to discussing the most appropriate ways of addressing MASS operations from the regulatory perspective, meeting attendees will also consider submissions relating to MASS trials.  MSC 103 will also explore the impact of the COVID-19 pandemic on shipping and seafarers. The Committee is expected to discuss a number of submissions, including a proposal for adoption of a resolution on prioritising seafarers for COVID-19 vaccination.Another important item on the agenda is maritime security, including cyber security, piracy and armed robbery. The Committee is expected to discuss in particular the ongoing piracy problems in the Gulf of Guinea.Fuel safety is also high on the agenda, with the Committee expected to establish a working group to examine issues including fuel flashpoint, blended fuels and fuel sampling and testing.In response to the growing need for safer operation of domestic ferries, the Committee will be considering a set of draft model regulations on domestic ferry safety that can be incorporated into national law.  The MSC will also consider a number of proposals for future work, including how to address the problem of containers lost at sea. The Committee will adopt a number of amendments to SOLAS and other instruments. The session will also approve various sets of guidance and guidelines developed by the sub-committees.The meeting was opened by IMO Secretary-General Kitack Lim .

"We need to respond COVID-19 Challenges"At his opening remarks, Secretary-General Kitack Lim said that  the IMO moves ahead with important changes to regulations while also having to  respond to the challenges posed by the COVID-19 pandemic and its serious impact on global trade and travel, and particularly on seafarers.

"Seafarers should be recognized as key workers"Secretary-General also stated that the IMO Secretariat does  continue to work tirelessly together with other UN sister organizations and industry partners to encourage Member States to recognize seafarers as "key workers".
Mr. Lim reminded the UN General Assembly Resolution adopted in December 2020, and to prioritize their vaccination, thereby facilitating seafarers' safe movement across borders. "In this regard, I would again impress on all Member States the need to designate seafarers as “key workers”. So far we have received only 58 relevant notifications, marking about a third of our membership" Kitack Lim noted.

"Seafarers' repatriation and joining to ships now more efficient"About the repatriation and joining to ships of seafarers, Kitack lim said as follows:
"Recently, we could observe the positive effects of our efforts, with the number of seafarers awaiting repatriation or joining of ships significantly reduced from 400,000 to 200,000. I remain confident that by working together we will eventually overcome this difficult and challenging situation for global shipping. Rest assured that this Organization will continue to do all it can to assist the maritime community and in particular our seafarers."

"Seafarers: at the core of shipping's future"Kitack Lim further noted that  IMO's commitment to put this year's world maritime theme: "Seafarers: at the core of shipping's future", into action. Lim said that the theme provides a unique opportunity to send a clear message to the world to help protect seafarers' rights and raise awareness of their exceptional contribution as key and essential workers, as always on the front line of delivering world trade despite the ongoing pandemic.  "In this regard I must convey to you my concern regarding the COVID 19 pandemic upsurge in many parts of the world. In particular, the current situation in India  gives cause for grave concern.  I offer my heartfelt support to all those suffering loss and hardship. Seafarers in particular remain vulnerable as the impacts continues to escalate." Lim said. Kitack Lim urged enhanced global collaboration and cooperation among all nations to support the supply of vaccines for the benefit of all and to make a difference in the fight against this pandemic.

Agenda of the meetingIn terms of the agenda of the meeting, Kitack Lim said that  at this session there would be a dedicated Working Group to deliberate on ways to address the security challenges in the Gulf of Guinea. IMO is supporting Member States to develop a coordinated “whole-of-government” approach to maritime security. Actions by IMO Member States have been successful in most areas in containing piracy – but this has required a strong cooperative effort between many stakeholders: Governments, their navies and law enforcement agencies, the shipping industry, and non-governmental as well as intergovernmental organizations to achieve these results. Although this session is being held remotely, I am confident that the customary IMO spirit of cooperation will prevail during your deliberations, and that it will take us a step closer to solving the security crisis in the Gulf of Guinea.

Maritime Autonomous Surface ShipsAbout Maritime Autonomous Surface Ships, Secretary-General Kitack Lim noted the following:
"I am aware that work is now delayed for about a year due to the pandemic. We must keep in mind that the objective of the regulatory scoping exercise is to identify items for further discussion in the future. The objective is not to discuss or decide on recommendations at this stage. However, it is clear that many delegations would like to start the actual regulatory work as soon as possible. I encourage you to do all you can to finalize the scoping exercise at this session, so that further regulatory work can be considered as soon as possible to ensure that regulation keeps pace with development. At this session your Committee is expected to adopt draft amendments to eight mandatory instruments, including SOLAS; the STCW Convention and Code; and the 1988 Load Lines Protocol. Related amendments to two non-mandatory instruments will also be finalized for approval."

Measures to enhance safetyAnother key issue at the 103th session of the Committee,  is the development of further measures to enhance the safety of ships relating to the use of fuel oil, Mr. Lim said. "It has now been more than a year since the entry into force of the 2020 sulphur limit MARPOL regulations. Indications are that the transition has been extremely smooth, a testament to the thorough preparations of all stakeholders prior to the new rules becoming effective." Said Kitack Lim. Goal Based StandardsAdreessing the Goal Based Standards, Secretary-General Kitack Lim said that GBS Audit programme has been finally carried out as planned and delegates would be invited to consider the report of the combined GBS audit on the rectification of non-conformities of IACS and DNV-GL ship construction rules. The next scheduled GBS audits would be conducted in early 2022 when the first three-year maintenance audit cycle begins, in accordance with the Revised GBS Verification Guidelines, Lim said. Finalizing his words, Kitack Lim thanked the stepping-down chair person of the Maritime Safety Commitee, Mr. Brad Groves for the sterling work for the Committee over many years and in wished all the very best for the future endeavours. Ms. Mayte Medina of the United States elected as new Chair Person of IMO MSC

Ms. Mayte Medina (United States) was elected Chair at the start of the session, following the resignation of the long-serving previous Chair, Mr. Brad Groves (Australia) at the end of last year. Mr. Theofilos Mozas (Greece) was elected as Vice Chair for 2021. 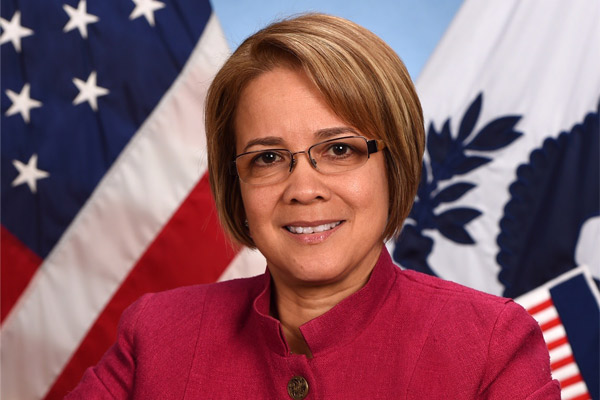 Ms. Medina has been with the U.S. Coast Guard since 1999, under various capacities.  She is currently the Chief for the Office of Merchant Mariner Credential at the Standards Directorate.  She develops and manages legislative and regulatory issues concerning merchant vessel personnel and labor issues, including the United States compliance with the International Convention on Standards of Training Certification and Watchkeeping for Seafarers, (STCW) 1978, and the Maritime Labor Convention (MLC), 2006.

She continues to coordinate and lead the U.S. delegations to the IMO, on issues related to maritime safety and security, including merchant vessel personnel qualifications and training, and human element.  In addition, she also leads the U.S. delegations to the ILO on maritime labor issues; and to the WHO on maritime medical issues.  She currently chairs the IMO Human Element, Training and Watchkeeping (HTW) sub-committee.

Ms. Medina continues to distinguish herself as the domestic and international authority in the areas of seafarer training and credentialing, and maritime labor issues.  Her advice and counsel is frequently sought by international organizations, industry and other administrations.  She lends her expertise to the IMO, ILO, as an expert to assist other countries to establish their national infrastructures in compliance with international Conventions.

IMO postpones further meetings due to COVID-19 but begins rescheduling...