The mandatory audit scheme is seen as a key tool for assessing Member States’ performance in meeting their obligations and responsibilities as flag, port and coastal States under the relevant IMO treaties and then offering the necessary assistance 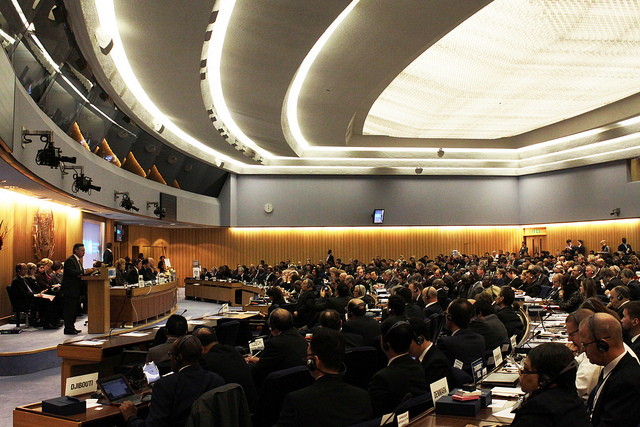 The Assembly of the International Maritime Organization (IMO), meeting for its 28th session in London, has adopted key resolutions and amendments relating to the Organization’s mandatory audit scheme, paving the way for the scheme to come into effect by 2016 once amendments to mandatory instruments have entered into force.  Election of the IMO CouncilThe Assembly elected the 40-Member IMO Council for the next biennium 2014 to 2015. IMO Member State audit scheme The mandatory audit scheme is seen as a key tool for assessing Member States’ performance in meeting their obligations and responsibilities as flag, port and coastal States under the relevant IMO treaties and then offering the necessary assistance, where required, for them to meet their obligations fully and effectively. The Assembly adopted the IMO Instruments Implementation Code (III Code), which provides a global standard to enable States to meet their obligations as flag, port and/or coastal States; the Framework and Procedures for the IMO Member State Audit Scheme; the 2013 non-exhaustive list of obligations under instruments relevant to the III Code; and a resolution on transitional arrangements from the voluntary to the mandatory scheme. The Assembly also adopted amendments to the International Convention on Load Lines, 1966; the International Convention on Tonnage Measurement of Ships, 1969; and the Convention on the International Regulations for Preventing Collisions at Sea, 1972, as amended, to make the use of the III Code mandatory in auditing Member States to determine how they give full and complete effect to the provisions of those Conventions to which they are party. Following this, the Organization is expected, during 2014, to adopt similar draft amendments (which have already been approved by the Maritime Safety Committee (MSC) and the Marine Environment Protection Committee (MEPC)) to  the International Convention for the Safety of Life at Sea, 1974, as amended; the Protocol of 1988 relating to the International Convention on Load Lines, 1966; the International Convention on Standards of Training, Certification and Watchkeeping for Seafarers, 1978, as amended; and Annexes I to VI to the International Convention for the Prevention of Pollution from Ships, 1973, as modified by the Protocol of 1978 relating thereto, and its 1997 Protocol, as amended. The adoption of the various amendments and their entry into force will form the basis for an institutionalized audit scheme.   Strategic plan and budget
The Organization’s updated strategic and high-level action plans and the related results-based budget for 2014 to 2015 were adopted by the Assembly. The Assembly approved a budget of £64,304,000 for 2014 to 2015, comprising an appropriation of £31,686,000 for 2014 and £32,618,000 for 2015. Adoption of resolutions
The Assembly adopted a number of resolutions submitted by the various IMO Committees and by the Council’s 27th Extraordinary Session. The topics covered by such resolutions include: • Prevention and suppression of piracy, armed robbery against ships and illicit maritime activity in the Gulf of Guinea;
• Guidelines on the preservation and collection of evidence following an allegation of a serious crime having taken place on board a ship or following a report of a missing person from a ship, and pastoral and medical care of persons affected;
• Revised guidelines on the implementation of the International Safety Management (ISM) Code by Administrations;
• Revised guidelines for a  structure of an integrated system of contingency planning for shipboard emergencies; • Guidelines to assist investigators in the implementation of the Casualty Investigation Code;
• Fair treatment of crew members in respect of shore leave and access to shore-side facilities;
• Recommendations for the training and certification of personnel on mobile offshore units (MOUs);
• Application of the International Convention for the Control and Management of Ships' Ballast Water and Sediments, 2004;
• Entry into force and implementation of  the 2012 Cape Town Agreement on the Implementation of the Provisions of the Torremolinos Protocol of 1993 relating to the Torremolinos International Convention for the Safety of Fishing Vessels, 1977;
• Implementation of the Convention on Facilitation of International Maritime Traffic (FAL);
• Voluntary application of the IMO Ship Identification Number Scheme to fishing vessels of 100 gross tons and above;
• Amendments to the survey guidelines under the Harmonized System of Survey and Certification (HSSC);
• Guidelines for the designation of special areas under MARPOL;
• Amendments to the International Convention on Load Lines, 1966 (1966 LL Convention),   to shift the Winter Seasonal Zone off the southern tip of Africa further southward by 50 miles;
• Recommendation on the use of adequately qualified deep-sea pilots in the North Sea, English Channel and Skagerrak; and in the Baltic Sea; and
• Recommendation on the use of national tonnage in applying international conventions. Council 111th session
The Council met for its 111th session on 4 December, and re-elected Mr. Jeffrey G. Lantz (United States) as its Chairman and re-elected Mr. Dumisani Ntuli (South Africa) as its  Vice-Chairman. Assembly background
The 28th Assembly of IMO met in London at IMO Headquarters from 25 November to 4 December 2013. It was attended by more than 1,100 representatives from159 Member States and two Associate Members; one non-Member; the World Meteorological Organization (WMO) and the Food and Agriculture Organization of the United Nations (FAO); and from 12 intergovernmental organizations with which agreements of co-operation have been concluded, 31 international non-governmental organizations in consultative status, and the  World Maritime University (WMU). All 170 Member States and three Associate Members are entitled to attend the Assembly, which is IMO’s highest governing body. The intergovernmental organizations with which agreements of co-operation have been concluded and international non-governmental organizations in consultative status with IMO are also invited to attend. The Assembly normally meets once every two years in regular session. It is responsible for approving the work programme, voting the budget and determining the financial arrangements of the Organization. It also elects the Organization’s 40-Member Council.