THE capacity of idle containerships at the beginning of March has surged to an all-time high of 1.57 million TEU - topping the 1.52 million TEU peak at the end of 2009, reports Alphaliner. 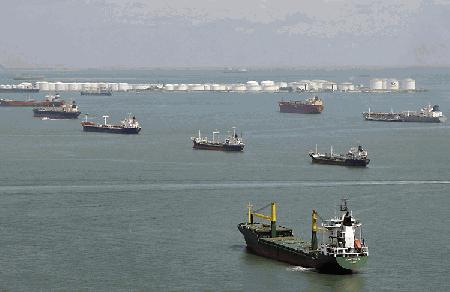 Idle  boxship fleet reaches record high of 1.6 million TEU
THE capacity of idle containerships at the beginning of March has surged to an all-time high of 1.57 million TEU - topping the 1.52 million TEU peak at the end of 2009, reports Alphaliner.
The survey also showed that if it weren't for 140,000 TEU sold for scrap since December, the idle fleet would have been even bigger.
Some 400,000 TEU is expected to be scrapped in 2016, but this is well below the 1.25 million TEU of capacity that is to be delivered.
Between fleet deletions and newbuilding deliveries, overall vessel supply is thus expected to increase by 850,000 TEU for a full-year fleet growth rate of 4.3 per cent, said Alphaliner.
Unlike recent years, when carriers could absorb surplus capacity through slow steaming, low fuel prices have prompted ships to speed up, worsening the over-supply situation.
In this respect, at least 12 container liner services have been re-routed from the Suez or Panama Canals to the longer route via the Cape of Good Hope.
Contrary to previous peaks, today's idle fleet includes an unprecedented number of very and ultra large containerships of over 7,500 TEU, with some 55 ships of 7,500-19,000 TEU currently without assignment. Carriers face difficulties keeping their big ships fully employed, as weak demand on the European routes has already forced them to withdraw one Far East to North Europe string since the middle of last year.
The latest casualty is the CKYHE's CES loop, which is to be dropped at the end of March. This further service rationalisation adds to earlier suspensions of the G6's Loop 6, the 2M's 'AE-9/Condor" and the O3's 'FAL 3/AEX 4/AEC 7" Together, these three shutdowns have already removed demand for some 30 ships of 9,000-14,000 TEU.