THE 23,964-TEU HMM Algeciras, reckoned to be the world's biggest box ship today has docked at Hamburg completing it Asia-North Europe 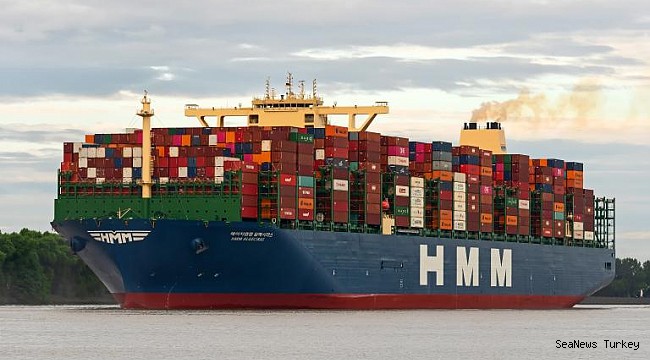 The new flagship of South Korean liner shipping company HMM - formerly Hyundai Merchant Marine - called at the Port of Hamburg where she was handled at HHLA Container Terminal Burchardkai - CTB. A total of 13,600 TEU were discharged and loaded.

This mega-containership was built by the South Korean shipyard group Daewoo Shipbuilding and Marine Engineering - DSME - as the first ship in a new series of 12 and recently delivered to HMM.

The ship succeeds the previous record holder, the MSC Gulsun, a vessel of 23,756 TEU.

With a length of 400 metres and a breadth of 61 metres, along with her eleven sister ships to follow the HMM Algeciras belongs to the Megamax-24group. These extra-large vessels can stow 24 transverse rows of 24 containers. To conform to the environmental regulations in force since the beginning of this year, all 12 ships are being fitted on delivery with scrubbers.

'We are delighted that in the middle of the corona crisis, the HMM Algeciras has been able to complete her maiden voyage to Hamburg with no problems. All those involved in Hamburg have contributed to the safe and efficient handling of this unusually large vessel,' said Hamburg Port Authority CEO Jens Meier.

Yuan erases 2021 gains against dollar as central bank steps aside

Richard Steele to be ICHCA's new head in July