Inside a simulation chamber, Kip Carlson is attempting to turn around a container ship longer than the Empire State Building within the narrow confines of one of Oakland’s port channels. 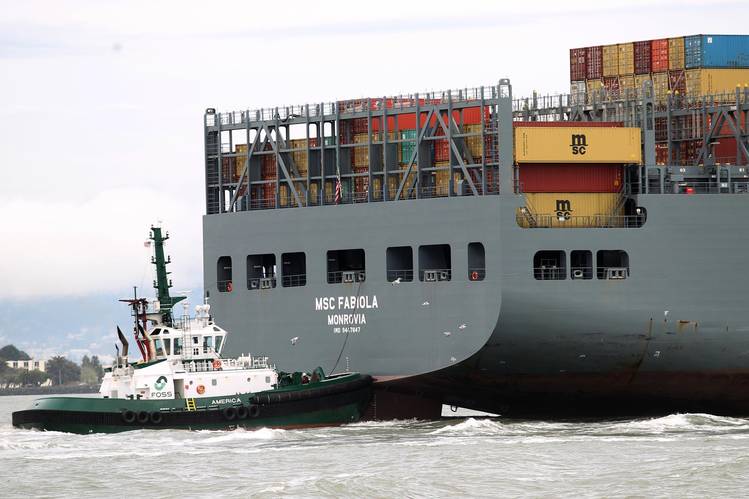 Harbor Pilots Called to Steer Larger Ships
Inside a simulation chamber, Kip Carlson is attempting to turn around a container ship longer than the Empire State Building within the narrow confines of one of Oakland’s port channels.
It is a tight squeeze. Mr. Carlson has roughly 50 feet to maneuver on either end of the ship, which rises so high out of the water that he can’t see the vessel’s sides, or two simulated tugboats assisting with the turn. Relying on his view of the channel as well as maps and measurements displayed on screens spanning the bridge, he gives orders to the ship’s crew.
After half an hour, the ship is facing back toward the San Francisco Bay and the simulator powers down.
Mr. Carlson and his team were practicing before the arrival of the Benjamin Franklin, a container ship owned by French shipping line CMA CGM SA. The 1,305-foot-long ship, capable of carrying about 18,000 20-foot containers, will be the largest to call on a U.S. port, with scheduled stops in Los Angeles on Saturday and Oakland on Dec. 31.
As a harbor pilot—or bar pilot, as they are known in San Francisco—Mr. Carlson hops on board a ship to guide it through the final miles at the end of its often globe-spanning journey, a job that has gotten more challenging as ships have gotten bigger. Many container ships sailing now carry twice as much cargo as the biggest vessels 10 years ago, reflecting swelling global trade volumes and shippers’ demands to drive down costs.
The largest vessels have only a few feet to maneuver in some port channels; stacked-up megaships come within inches of scraping the bottom of the Bayonne Bridge on their way into Newark’s terminals. An accident can cause hundreds of millions of dollars in damage to a ship and its cargo, or trigger an epic port-traffic jam.
“These are the largest moving objects on the planet,” said Nick Cutmore, secretary-general of the International Maritime Pilots Association. But as container ships grow in size, “the ports don’t grow correspondingly,” Mr. Cutmore said, “so the squeeze is on the pilots.”
The San Francisco Bar Pilots earned more than $450,000 in net income last year, paid from fees an average of $4,700 in fees paid by each ship. This year, the pilots lobbied California’s state legislature to be able to charge higher rates for their services but the bill was opposed by shippers and carriers and it stalled in the state Senate.
The pilots’ fees are based on vessel tonnage, so as ships get larger pilots are earning more per ship, said Mike Jacob, general counsel for the Pacific Merchant Shippers Association, which represents the ratepayers.
“We have absolutely no problem paying them more for larger ships,” because there is greater skill needed and more risk associated with moving those ships through the port, Mr. Jacob said. “The question is should they get paid at an even higher rate than they do.”
Harbor pilots say the San Francisco Bay has some of the most difficult navigational conditions of any U.S. port, including thick fog, tidal currents and multiple bridges. “Pilots around the world deal with all of the same challenges, though usually in a smaller venue,” Mr. Carlson said. “I can’t think of any place that has as many challenges as we do.”
A spokeswoman for the U.S. Coast Guard, which tracks marine accidents, said such incidents tend to be more prevalent in harbors than at sea because of the confined spaces.
“There are more vessel controls being manipulated while maneuvering the ship in tight quarters than simply steaming in open waters,” Coast Guard Spokeswoman Lisa Novak wrote in an email.Earlier this month, a bar pilot had just ceded navigation to a departing container ship’s captain and was disembarking from the vessel outside the San Francisco Bay when a swell hit the ship, jostling the cargo and sending a dozen containers into the water.
With larger ships, the increased surface area magnifies the effects of wind in the bay, making the vessels difficult to steer. Two pilots are required to navigate ships longer than 1,150 feet under the Golden Gate Bridge, through the bay and into Oakland’s port. The second pilot operates an advanced GPS that tracks the ship’s position to the centimeter.
To date, the San Francisco Bar Pilots have brought ships as long as 1,204-feet into berth, but to get ships of 1,300 feet or more they’re starting with this simulation.
“As the ships get bigger and bigger, the responsibility is on us,” said George Livingstone, another longtime bar pilot in San Francisco. “And that burden goes up.”

Pandemic to cause 'unprecedented decline' in container traffic: Clarksons

HMM Oslo heads for Europe with a full load of 19,504 containers