GLOBAL trade forecasts for 2013 are already being revised down, only a few months into the year with the latest estimates from Clarkson dropping from 6.6 per cent a month ago to 6.1 per cent today. 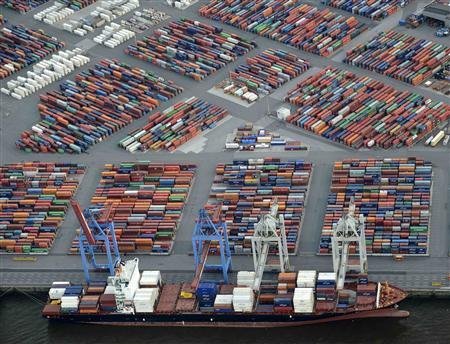 03 May 2013 - 21:29
GLOBAL trade forecasts for 2013 are already being revised down, only a few months into the year with the latest estimates from Clarkson dropping from 6.6 per cent a month ago to 6.1 per cent today.

The maritime consultancy group expects containerised trade to reach 166 million TEU in 2013, which will be the highest ever recorded figure for the industry. But even in this early stage of the year the forecasts for the major trades are coming down significantly.

According to Clarkson's Container Intelligence Monthly report, Asia-Europe volumes just one month ago were forecast to grow 3.96 per cent, today that figure has been adjusted to 3.48 per cent for a total volume of 20.8 million TEU.

This marks an increase of just 1.46 per cent from 2011, which was the last year that the trade actually posted growth…

So in actual fact if this latest Asia-Europe forecast proves accurate, the trade will only have caught up to where it was two years ago—and keep in mind that 2011 was a loss-making year for the industry and the Asia-Europe trade in particular.

On the transpacific trade the latest forecast is for growth of 4.3 per cent for a total volume of 21.8 million TEU, downgraded from the earlier projection of 5.68 per cent growth for the year.

The biggest change among all trade forecasts covered by Clarkson in its monthly report is on the transatlantic, which is now expected to post growth of just 1.58 per cent to 6.4 million TEU, down from the earlier forecast of 4.83 per cent for the year.

Commenting on the precarious outlook for the mainline trades this year Clarkson said that even these revised figures for "modest growth" were subject to further downgrades.

"This is dependent on the larger European economies avoiding recession, as well as US consumer demand shrugging off the ongoing fiscal uncertainty," it said.

The US is roughly US$4 trillion in debt and is now in the process of trying to wipe out that debt through what will most likely be a combination of increased taxes and major spending cuts, all of which are unlikely to encourage consumer spending.

Clarkson again projects that a bulk of this year's trade growth will occur in the emerging markets. However, even the projections for these trades are down, according to the latest report from the group.

Non-mainline east-west trades, which include the trades connecting North America, Europe and the Far East to the Indian Subcontinent and the Middle East, are expected to collectively post growth of 6.59 per cent to 21 million TEU, down from the previous projection of 7.61 per cent growth.

The North-South trades have had their forecast revised down from 7.06 per cent a month ago to 6.39 per cent today for a total of 28.3 million TEU. This of course is still relatively healthy growth, but the fact that the downward revisions are coming so early in the year does provide some fodder for concern.

The only projection that remains unchanged from month to month is the "others" category, which includes all intra-regional trades such as the Intra-Asia or Intra-European trades, and south-south trades as well. These markets are expected to see growth of a very healthy 7.48 per cent year on year in 2013 for a combined volume of 67.5 million TEU.

Intra-Asia trade alone, according to Clarkson is forecast to grow 8.3 per cent this year, which should see the likes of Wan Hai, OOCL, RCL and other Intra-Asia specialists post strong results this year.

Total container carrying capacity is expected to rise 6.4 per cent to 19.55 million TEU this year, which Clarkson says will put supply and demand growth in relative balance for 2013, but it will still be added onto the already steep supply surplus in the market from last year.

Shipping lines will no doubt take steps to help reduce the gap even further. One potential problem, however, could be in vessel cascading as larger vessels in the 8,000 TEU range that are now too small for the Asia-Europe and transpacific markets will be transferred over to the healthier intra-regional trades.

This could then see the supply and demand mismatch in Asia-Europe and the transpacific transferred to these other markets that typically work with far smaller margins than the larger trades, thus making the margin of error smaller as well in terms of rate setting.

It is still very early in the year and so much now is merely speculative. But what we can be sure of, even in the first quarter, is that 2013 will be a challenging year for the market. The only thing in question for now is just how challenging it will be.