GLOBAL container volume saw a strong rebound in 2010, marking an estimated 560 million TEU, up an all-time high of 14.5 per cent year on year after experiencing an 8.9 per cent decline in 2009, the first ever drop. 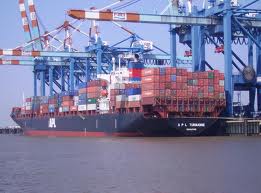 GLOBAL container volume saw a strong rebound in 2010, marking an estimated 560 million TEU, up an all-time high of 14.5 per cent year on year after experiencing an 8.9 per cent decline in 2009, the first ever drop.

Last year's recovery was mostly attributed to the growing volume through Chinese ports, reported maritime analysts at Paris-based Alphaliner. Total container volumes handled in China, including Hong Kong, grew 17.9 per cent against 2009 to 169 million TEU. This accounted for 30.1 per cent of the global throughput, a year-on-year increase of 29.3 per cent.

South America comes after China as the second fastest growing container volume region with an increase in throughput by 17.6 per cent in 2010.

Among the top 50 ports worldwide, the average growth in container volume was 15 per cent to 363 million TEU in 2010 compared to 316 million TEU in 2009. Only three ports recorded a loss, with Salalah and Gioia Tauro suffered a minor loss of 0.2 per cent, and Algeciras a loss of 7.8 per cent.

Hong Kong's Hutchison Port Holdings (HPH) regained its global lead with total volumes increasing 14.9 per cent to 75 million TEU in 2010. The runner-up is Hague-based APM Terminals with a growth of two per cent to an estimated 70 million TEU last year. The Maersk-owned APMT pulled out of six locations, including Oakland and Savannah in the US, Kaohsiung, Shenzhen-Yantian, Genoa and Dunkirk, said Alphaliner.

China Merchants Holdings International (CMHI) posted the highest growth of 19.2 per cent year on year with a total handling volume of 52.3 million TEU in 2010. Its Chinese port facilities in Shenzhen, Shanghai, Ningbo, Tianjin and Qingdao, absorbed 31.8 per cent of container volumes in mainland China, not including Hong Kong.

CMHI still has a potential to grow at a faster pace because it bought 47.5 per cent of the Tin-Can Island Container Terminal near Lagos last November. Adding to this are two development projects in Colombo and Vietnam, though construction has yet to start.