Glaciers On Mount Agri Are Shrinking

Glaciers atop snow-capped Mount Agri in eastern Turkey have shrunk 30 percent in surface area over the last 3 decades, a researcher said Wednesday. 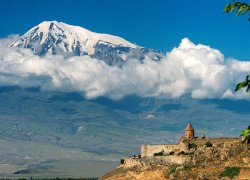 Glaciers atop snow-capped Mount Agri in eastern Turkey have shrunk 30 percent in surface area over the last 3 decades, a researcher said Wednesday.

Geologist Mehmet Akif Sarikaya, an assistant professor at Istanbul's Fatih University, told AFP: “We used satellite images to analyze the response of glaciers at the summit of Mount Ararat to climate change.”

Temperature changes might eventually wipe out the ice fields, warned Sarikaya. “We sought the reasons for the melting and found that the temperature had increased by 0.05 degrees Fahrenheit per year” during the period studied, he said.

Increased precipitation and sunshine might have also contributed to the glacial melting, he added.

Mount Ararat is believed to be the final resting place of Noah’s Ark, which settled on the mountain top after God flooded the Earth because of corruption that plagued the world. Once the waters receded, the Ark came to rest on a mountain that believers contend is Mount Ararat, the country’s highest peak at 16,853 feet.

Many expeditions have scoured the mountain in search of the lost Ark, without any convincing results so far. Sarikaya declined to comment on whether the melting of the glaciers would provide opportunities in the quest for the biblical ship’s remains.