NONE of the 28 very large crude carriers owned by Iranian national carrier NITC are available for spot market business — and they appear to be chartered to Iran’s national oil company, as it attempts to sell off its crude surplus.

None of NITC’s VLCCs are available for spot market business.

NONE of the 28 very large crude carriers owned by Iranian national carrier NITC are available for spot market business — and they appear to be chartered to Iran’s national oil company, as it attempts to sell off its crude surplus. 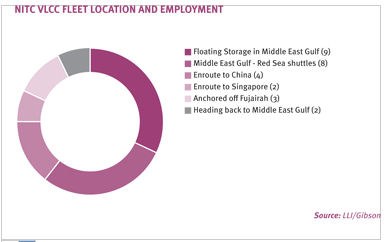 This is considerably less than the peak seen at the end of May, when 25 NITC-owned VLCCs were storing 6.9m tonnes of crude for National Iranian Oil Co.

“NITC has told us that none of their ships will be available for the next two weeks. They are all on time charter to NIOC for its own programme of business,” one broker said.

Eight NITC-owned VLCCs have been used over the last month to ship Iranian crude to the Egyptian terminal of Ain Sukhna, with five anchored in the Gulf of Suez, waiting to discharge cargoes, according to Lloyd’s List Intelligence.

But since Iranian sanctions were tightened, the biggest trade for NITC’s tankers have involved shipments of Iranian crude for NIOC to Ain Sukhna. From there, crude is pumped to the Sidi Kerir terminal on Egypt’s Mediterranean coast, where it is blended with other Middle East crudes. From Sidi Kerir, crude is sold to traders based in the Mediterranean, with the biggest volumes going to Italy, Spain and to Turkey.

China remains a key market for Iranian crude, with around 1.8m tonnes, or 14m barrels, shipped from Iran to China on seven VLCCs over the last two moonths.

“China is now the best market for Iranian crude. Everywhere else seems to be a ‘no-no’, as no-one wants to be associated with [the crude] for fear of any backlash from the US,” the Gibson analyst said.

Five NITC-owned VLCCs discharged crude in China in the last month and two in July, according to LLI. Two more NITC ships were en route to Chinese terminals to discharge in September.

It was thought the tankers were holding crude cargoes, but some of them could be storing fuel oil and gas condensates, according to Iranian media reports.

In a shift from the usual practice of shipping fuel oil on aframax tankers, NITC has placed fuel oil in VLCCs to provide prompt deliveries to Asia when required, said a London broker.