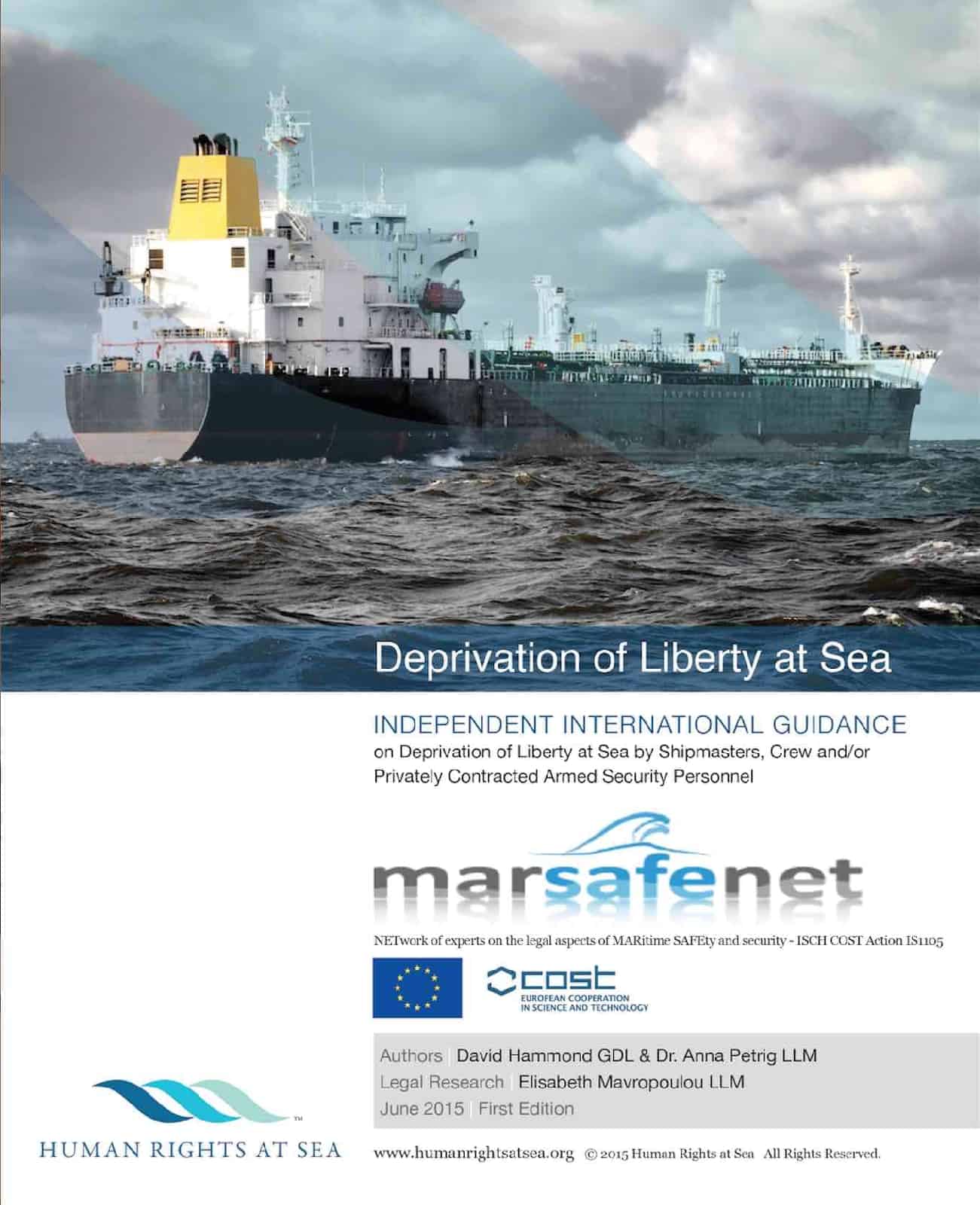 Human Rights at Sea (HRAS) together with the European Union’s MARSAFENET (COST Action IS1105) are delighted to announce the publishing of a new international and independent guidance for ‘Deprivation of Liberty at Sea’, which is available from today via the HRAS website. This is part of the HRAS ‘Unlocking the issue’ campaign to raise global awareness of maritime human rights and constitutes a milestone in MARSAFENET’s quest to transfer scientific findings into concrete normative and policy solutions.

This Guidance, published jointly by Human Rights at Sea (HRAS) and the Network of Experts on the Legal Aspects of Maritime Safety and Security (MARSAFENET) and financed through the European Union COST Action IS1105, is the first independently drafted international document covering Deprivation of Liberty (DoL) by Shipmasters, crew and/or Privately Contracted Armed Security Personnel (PCASP). It is the result of in-depth research into the domestic and international legal frameworks governing deprivation of liberty on board private vessels. The Guidance, which complements existing guidelines on fair treatment of seafarers in the event of a maritime accident as adopted by the International Maritime Organization (IMO), aims to become a leading soft law instrument voluntarily applied by relevant actors in the shipping, fishing and security industries.

HRAS CEO, David Hammond, said: “This first edition of the Deprivation of Liberty at Sea Guidance has been the result of six months work involving significant research and stakeholder input. Working alongside European colleagues, Human Rights at Sea is proud to be able to deliver a new and relevant maritime human rights reference document in partnership with EU MARSAFENET.”

The growing likelihood for shipmasters to deal with criminal offences committed at sea, notably in immediate proximity to, or on board the vessel under their command and control with increasingly smaller crews and against a background of potential legal actions conducted against seafarers for unlawful deprivation of liberty actions means that the Guidance at hand provides an immediate reference guide for all interested parties in support of decisive and lawful decision-making.

The issue of DoL of criminal suspects by Shipmasters, crew and/or PCASP is highly topical: this is true for piracy prone areas but also for areas with large migration movements like the Mediterranean and the Andaman Sea, where chances are that Shipmasters or crew may be confronted with persons suspected of trafficking in human beings or other criminal offences.

HRAS and MARSAFENET have determined that this voluntary guidance should be made freely available for the international public benefit in line with the charitable focus of HRAS and the open access policy pursued by MARSAFENET. Any entity using the document in whole, in part or in concept must fully attribute its use to HRAS and MARSAFENET. HRAS retains full IP and copyright over the work and the associated ‘HRAS Deprivation of Liberty at Sea’ concept.

TradeWinds' Christian Radich boat party as popular as ever