The UK Marine Pilots Association (UKMPA) has welcomed the outcome of a court challenge to a harbour authority’s attempt to terminate its agreement for pilotage services in its waters. 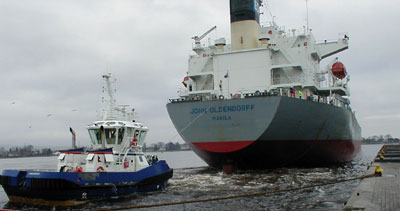 The UK Marine Pilots Association (UKMPA) has welcomed the outcome of a court challenge to a harbour authority’s attempt to terminate its agreement for pilotage services in its waters.
Members of the Foyle Pilots’ Cooperative (FPC) applied for a judicial review of the Londonderry Port & Harbour Commissioners’ move to give one year’s notice of the end of the 2008 contractual agreement.
The pilots argued that the move — which was due to come into effect on 1 January 2015 — would have resulted in a ‘serious reduction of standards in a compulsory pilotage area, as it would have left the port of Londonderry without any pilot authorised to perform the pilotage of the largest ships using the port after that date.
The pilots said that if the agreement had ended within the one-year notice period, it would have meant that there would be no pilot available with qualifi cations in line with the regulatory requirements for probation and training for the pilotage of the ‘numerous’ ships of over 120m visiting the port. At the initial High Court hearing, the judge stated that the harbour authority should have communicated better with its pilots than it had done — and the CHA admitted to the court that, in the interests of safety, the FPC should continue to provide pilotage services for at least a further year after the proposed termination date.
The FPC challenge was settled in an out-of-court settlement. UKMPA chairman Captain Don Cockrill described the case as highly significant.
‘There should be no doubt that whilst no finding was made under the judicial review, the steadfast manner in which the three Foyle pilots pursued this action has done a great service to all UK pilots and will ultimately serve to illustrate to those in power how dangerous the current de-regulated pilotage provisions can be in unscrupulous port management hands,’ he added. Capt Cockrill criticised the failure of the Department for Transport to respond to repeated requests to intervene to uphold pilotage standards at the port. He said the CHA had taken the ‘extraordinary’ decision to scrap the previous two-and-a-half year training scheme in favour of a ‘superficial’ four-month simulator-based system, which no oversight from any incumbent senior pilot.
‘Whilst it may arguably be in accordance with the powers granted to the CHA under the 1987 Pilotage Act, it most certainly is not in compliance with the contents of IMO resolution A960 or the ethos underpinning the Port Marine Safety Code,’ he added.