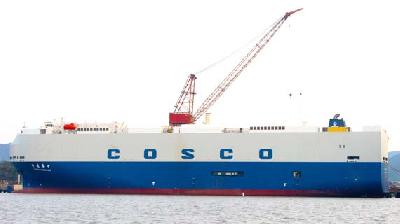 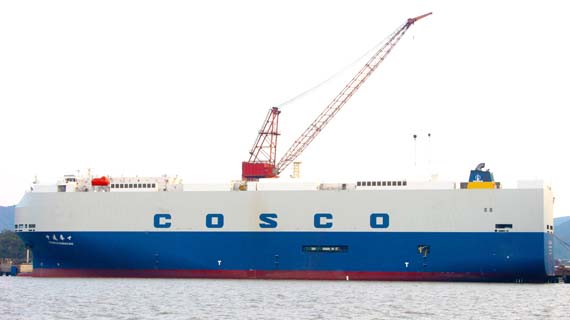 The 5,000-car capacity vessel was loaded with 4,380 Chinese cars and engineering vehicles, and set sail for Brazil, establishing a new record for the number of vehicles loaded on a made-in-China car carrier.

The ship is one of the two Cosco operates. It is 182.8 metres long, 32.2 metres wide, has 12 decks for cars with 5,276 slots, and can sail at 20 knots. It is the most advanced car carrier a Chinese shipping line has ever put into service. The other ship was put into service in February.

After the world economic downturn in 2008, China rolled out supportive policies for the domestic automobile industry and stimulated rapid development. According to statistics from China Association of Automobile Manufacturers, China made 18.3 million cars and sold 18.1 million in 2010, both were No 1 in the world.

China started large volume exports of Chinese cars in 2005 and exported 168,000 that year. The figure reached its peak before the 2008 financial crisis at 656,000 and shrank until recovery in October 2009. In 2010, the figure grew again to 559,000. During the first four months of this year, home-made car exports volume came to 230,000. As the BRIC countries are opening up their automobile markets for China, the export volume is expected to set new high with about 700,000 this year.

Surging car export has boosted demand for automobile transportation. Before the downturn, world automobile shipping is dominated by a few carries in Japan, Korea and Europe. Slot shortages have restricted the export of Chinese cars. In 2006, Cosco signed long-term strategic cooperation deal with 17 domestic carmakers and has made hefty investment on development and production of car carriers since.

Cosco Shipping, the branch of Cosco Group that develops ships for special tasks, set up a joint venture auto carrier with NYK in 2002 and launched a number of shipping lines to the Persian Gulf and Mediterranean. The joint venture accounts for the largest market share in the export of Chinese cars, and has shipped 530,000 of them.

Canada plans to build 2 Arctic icebreakers, first to launch in 2030

US goods consumption fell only one month amid Covid: sea-intelligence