CONTAINER rental rates have sunk to a 10-year low, 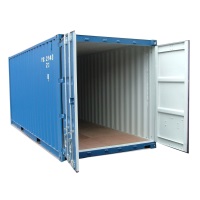 Similarly, used dry freight container prices have also reached a five-year low, largely in line with the decline in new equipment costs and also because of increased resale volumes.

"The outlook for 2015 is for the annualised average rental price of container equipment to drop further and reach its lowest point in more than a decade, with no improvement predicted for 2016," said Drewry box analyst Andrew Foxcroft.

The leased container equipment fleet increased in size by nine per cent during 2014, a faster pace than 2013 and well above the growth trend recorded for transport operators.

Shipping lines' owned fleet increased by less than four per cent in 2014, which compared with less than two per cent a year for 2012-13 combined and thus remains at an historic low.

All of the current top 15 container leasing companies have changed ownership, been started-up or undergone financial restructuring during the past decade, with one large fleet merger due for completion in 2015.

Cash returns from new equipment lease stayed flat through 2014, and into 2015, and per diem rates have continued to slide in step with the recent decline in new box pricing.