India’s pulses and oilseeds market witnessed an uptrend while spices market showed a weak trend sluggish export demand. The soybean complex was well supported by the news that US soybean planting is set to drop from 77.144 million acres 77.404 mn in the season that stars from September 1. Soybean acreage will reduce by 0.3% as farmers shift to corn. 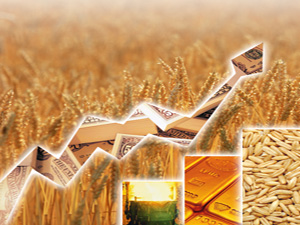 India’s pulses and oilseeds market witnessed an uptrend while spices market showed a weak trend sluggish export demand. The soybean complex was well supported by the news that US soybean planting is set to drop from 77.144 million acres 77.404 mn in the season that stars from September 1. Soybean acreage will reduce by 0.3% as farmers shift to corn.

Soybeans may rise 6.2 percent to $15 a bushel in Chicago, peaking before the USDA issues its acreage report at the end of March, Blooberg quoting Bill Biedermann, a senior vice president at Allendale said.
Indian pulses market witnessed an uptrend due to delayed arrivals on adverse weather conditions in growing regions and stocking by traders ahead of the marriage season beginning February to March. This led chana futures at National Commodity and Derivatives Exchange to touch record high.

Precious metals dropped this week end on speculation that borrowing costs will rise as the economy recovers, eroding the metal’s appeal as an alternative investment. The Federal Reserve has kept the benchmark interest rate at zero percent to 0.25 percent since December 2008 to bolster the economy. U.S. equities have been rising on optimism for the U.S. recovery.

Gold may rise next week after prices dropped, making the precious metal more attractive to investors, according to a Bloomberg News survey.

Silver futures for March delivery fell 27.3 cents, or 1 percent, to $27.20 an ounce on the Comex. The metal is set for a third weekly drop, the longest losing run since March.

On Friday, Crude for March delivery slipped 48 cents to settle at $89.11 a barrel on the New York Mercantile Exchange. The March contract in New York declined 3.7 percent this week. The February contract expired yesterday after dropping 2.2 percent to $88.86, the lowest settlement since Jan. 7.

Brent crude oil for March settlement climbed $1.02, or 1.1 percent, to end the session at $97.60 a barrel on the London- based ICE Futures Europe exchange.

OPEC raised its forecast for 2011 crude production from outside the group on increases from Russia and China. Non-OPEC supply will climb by 410,000 barrels to 52.62 million barrels a day next year, OPEC said in its monthly.

Also on the LME, tin climbed 2.9 percent to $27,745 a ton after reaching an all-time high of $27,750, on speculation that a shortfall of the metal used to make solders may worsen.

At MCX, Copper February contract declined from Rs 445.85 to Rs 437 levels, lower by 2.02 per cent. Other metals such as aluminium, tin, and nickel prices also gained on the LME, while lead and zinc declined.
Major Headlines

The Reserve Bank of India has said that it will encourage large foreign banks-the likes of Citi, Standard Chartered and HSBC -to set up Indian subsidiaries which would enable them to open more branches across the country.FMC autonomy: Markets fear delay in bill passage

The BSE Sensex is set to start flat to lower on Monday after sliding 4.2 percent last week, with companies controlled by Anil Ambani on the radar after the market regulator barred the billionaire from investing in publicly listed securities until the year end.

25% of India Inc reports flat or drop in real wages

Almost one-fourth of the companies surveyed in India have opined that real wages to their managerial-level employees have either been flat or declined over the last five years, a study has said.
The Forward Contracts Regulation Act (FCRA) Amendment Bill of 2010 has been referred to the department-related standing committee, raising concern among some market stakeholders whether it would be passed in the budget session.

If there was no further policy reform, India’s commodity exchange sector might stagnate soon, said a majority of participants at the third annual Leadership Summit on The Future of Financial Markets (FOFM) 2011 organised by the Financial Technologies Group.

Kotak Group-promoted Ace Derivatives and Commodity Exchange has announced the final settlement price of five agriculture commodity futures contracts which expired on Thursday. This is the first settlement price for the newly launched sugar contract.

Tyre manufactures may increase prices again due to the sharp rise in natural rubber (NR) prices. It will be the fourth increase in the current financial year. The quantum may vary from company to company but the range may be two-five per cent.