The Coast Guard says the Nantucket was on patrol off the east coast of Florida on Thursday when it responded to a mayday call from a cargo ship called Mystic.  The ship had capsized and broken into pieces near Damas Cay in the Bahamas. 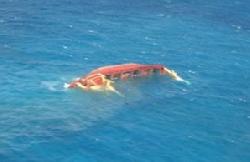 Ten crew members and a dog are lucky to be alive after their ship that was bringing supplies to Haiti capsized in rough waters in the straights of Florida.

The 206-foot Mystic was carrying a truck, food and other goods from Miami to Haiti when it struck a submerged object Wednesday afternoon near Cal Sal Bank, according to the Coast Guard.

The Mystic sent a mayday call to the Coast Guard, saying they were taking on water. The Coast Guard dispatched a HC-130 Hercules plane to the area of the call and were able to quickly locate the Mystic.

The crew of the Mystic worked to get water out of the ship with a pump and the Coast Guard dropped a second pump to them, but despite their efforts, the crew was unable to stop the flooding.

By the time the Coast Guard Cutter Nantucket arrived at the scene, the seas were between 8 and 10 feet and winds were over 30 miles per hour, keeping the rescue ship one nautical mile from the Mystic.

By 6 p.m. Wednesday, the Mystic crew was able to weigh anchor and get to a less rough area of the cay, and reported that the flooding was able to be controlled and that they'd stay on board as long as they could.

Around 3 a.m. Thursday, the ship reported that it was in danger of capsizing and that the crew was preparing to abandon ship. At 4 a.m., the 10-member crew and their dog abandoned ship and got into two life rafts.

The crew and dog were taken to Key West.

"It was a hectic rescue for sure," Lt. Kevin Edes, who was behind the wheel of the Nantucket, told keysnews.com. "The Mystic was close to the rocks, not mention the 10-foot seas. It was pretty wild out there."